I’m guessing the answer to this question is going to be quite subjective but here goes anyway.

I currently have a number of hives (currently 4 plus 2 walk away splits). I can mow past them on our ride on (about 5 feet from the hive entrances - obviously discharging the grass away not toward) and they don’t bother me. They’re happily dodging me as I motor past with no problems.

All of the hives I would consider quite calm hives. I’ve now retired the thick leather gloves for tight fitting latex gloves (from bunnings) and they are fantastic. I can use my phone with them and they make inspections much more enjoyable.

I have one hive (my original hive started with a package) - that has quite a different temperament than the others. While the other hives I can open up and have a few gaurd bees check me out then leave me alone - this original hive has at least half a dozen bees pretty angry. They’ll fly up at my hive tool regularly, or at my veil should I breath to closely into the hive. The “tone” of the hive indicates they arent impressed with the intrusion. On the last inspection i had one or two sting my suite.

The queen is a great layer. Last hive inspection I had both sides of a frame full of capped brood almost to the edges. It’s a very strong, active hive. However - the defensiveness does make inspections much less enjoyable. Having said that - when the hive is closed up they seem fine.

Should I just get over it - or do I pinch the queen out and add a frame or two of BIAS from my best hive?

As a hobby beekeeper and being allergic to stings (not anaphylactic, just large local reactions) I would prefer a calm hive.

Maybe buy a commercially raised queen and introduce some new genetics to your apiary.

I would be inclined to “just get over it”. One thing you could do is inspect that hive last.

What you’re describing sounds fairly normal to me. I always have my smoker ready for when bees get a bit defensive.

It’s when I can’t gain access to brood frames that I think a colony needs to get re-queened.

Maybe buy a commercially raised queen and introduce some new genetics to your apiary.

You are right. My most calm hive is one that I split last season and requeened with stock I purchased from Queensland (im in sydney). I’ll take future splits from this hive as it’s both calm and the queen is a good layer (I’ve added double brood boxes to keep up).

I would be inclined to “just get over it”. One thing you could do is inspect that hive last.

Thanks Jeff - i make a point of inspecting that hive last otherwise I end up with a bunch of angry gaurd bees while I inspect the rest of the hives. Sounds like I have a fairly normal hive here then.

I love reading the forum but can someone explain this acronym please?

Sounds like a normal strong hive. I always think of it like a game of rugby. A small hive is like a schoolboy team but a big strong hive is more like the All Blacks. If they only chase your hive tool concentrate on not flicking it around and only a couple of stings does not really suggest an aggressive hive.

Hi Matt,
I’m on the get over it bandwagon. In my, not-so-vast experience, the better and more experienced I get at beekeeping, the better the bees are. I’ve got mostly calm hives and if I get stung, it’s more often than not, because I’ve inadvertently squashed a bee in a fold of clothing or between my fingers/ hive tool or something. You also get better at reading their mood, which may also be set off by something unrelated to you eg. the weather, flowering of certain species etc etc.

On the plus side, the more aggressive bees tend to be better foragers (so I’ve read).

I started with a nuc with a calm, bred queen. Now I’ve got 10 and counting

, so with the splits and new queens, you really don’t know what they’re mating with as far as temperament goes. So far their behavior is not as calm as the original queen but quite consistent. I’m very relieved not to have to deal with Africanised bees.

I’m not so sure as it depends on how close your neighbours are. I would monitor and see whether the defensive trend continues and/or gets worse. If it does I would be looking to requeen. The BIAS approach only works if you have “good” drones for the new queen to mate with. Some areas do and some don’t. If you don’t have good drones or don’t know I would buy from a known source.

I agree Adam and would add, I don’t have close neighbours. If the situation deteriorates or you find yourself uncomfortable working with them, requeen.
Matt, I also use the blue, double layer chemical gloves from Bunnings - they’re great! It took a bit of getting used to as I found my hands attracting more bees. It doesn’t seem to occur to the bees to sting through them. I still keep the leather ones handy to go over the top if needed.

Trouble with those rubber ones is summer. Boy they are horribly hot!

Too true. When holding up the frames to the sunlight the other day, a bucket of water from inside the gloves trickled down my arms

You can buy cotton gloves that you can wear under the rubber gloves.

I have a push mower and can put this right up to the entrance on a sunny day, no issue. I found out in a friendly chat with my neighbour that when they use the ride on lawnmower (it is really old and sounds like a jet engine) alongside the fence the bees don’t like it and they have been stung a few times. The hives are about 2 metres from the fence line with a hedge and privacy screen. So they are really not a fan of their mower, but Im going to have to shift the hives a little more over.

I find if I rub my hands in baby powder the gloves go on easily - but yes they are horribly hot as you say - and I’ve not used them in the summer heat as yet. Not looking forward to that. 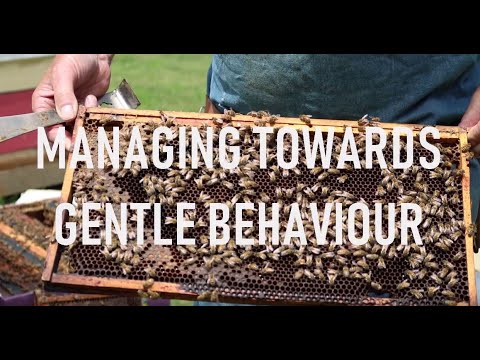 Thought this was a great demonstration of calm behaviour and frame stability.

Yes, they have some beautiful bees and a great series of videos. It was good to see them resume earlier this year.