Hi all,
I took a split from a very strong colony in my horizontal flow hive. I took a heavy frame of honey, three strong frames of BIAS with honey and pollen plus a single waxed empty frame placed on the outside. We are having another very cold and wet spring, just like last year. The split is now just over a week old and within days, the bees were spitting out chalkbrood from the nuc box (wooden) entrance. I was hoping for some fine weather following the split, but not to be.
My question is, what are the chances of losing the queen (in the making) to chalkbrood?
The split is now 9 days old and I’m yet to inspect. I’m keen to take a peek and look for queen cells but more rain is forecast - heavy in the next 24 hours then light (theoretically) until Tuesday.
Thoughts and feedback are much appreciated.
Thanks

The chances of losing a queen to chalk brood are high if chalk brood is in the frames. The good news is that the colony will make quite a few emergency queens, so therefore the chances of the colony raising a good queen are high. Then after that there is the normal odds that the successful virgin queen can fail to get successfully mated. Those odds are about 15-20% in my experience.

Thanks Jeff - that’s very much appreciated!
As a not very relevant update, I used the rain today as a means to move a hive I had on another property. It all went smoothly to start as I locked them in and had help lifting them into the back of the wagon.
At the other end, I went to lift them out and move them onto a temporary pallet. I tripped and fell on the hive!! In hindsight, it was probably too heavy for me, but OMG, what a disaster for all concerned - about twenty stings for me, lots of casualty bees mainly from the rain and the fall. I managed to plonk the hive back together roughly, opened the entrance back up, scoop up some piles of bees and deposit near the entrance and run for the hills. I’ll give them a wide berth for a while. Not sure yet if I killed the queen too. I just got home after a dose of roids for all the stings. Good grief! Not a pleasant experience.

Ouch, not a pleasant experience for sure. You were brave to still want to put all those bees back near the entrance, despite all the stings.

They certainly don’t like getting dropped and will let you know that in spades! They should be OK, I have had hives broken apart by idiots and cattle for unknown lengths of time. Put them back together and after a while they were off and running. Bees are tough little buggers….

Twenty stings, that starts to give you bragging rights

Not really, you got the abridged version. I ran off after dropping it to put on my bee jacket (only had a hat with veil on). Then I had to run off again to take the bee jacket off (hadn’t done the zip up enough), get the bees out and put it back on properly this time

. I had them everywhere, even down the gumboots. I had to drive (later) with my veil on

as there were still bees in the car crawling around - they mostly went for the windows though.

Lol! How long do you think I should steer clear? At the very least I need to level up the hive. Not keen!

Couple of days should do it. I take it you have a coat with hood so you should be OK to level them. Just smoke them and leave for a few minutes then just do it.

Work from the sides and back of the hive as usual.

Thanks, I normally leave them for a few days but I pondered a bit extra for this grumpy bunch.

Just suit up and do them. Don’t over think it, you are just levelling the hive, not even opening them.

I levelled it today after opting to wash the ‘sting here’ bee jacket. It was its long overdue, first wash! The bees barely noticed me.

Just an update on the split (see top). I didn’t see any queen cells, just a queen cup, which might have been there already (not 100% sure). I think in the photo are some chalk brood remnants. The bees have not drawn out any comb on the fifth frame. There are still some honey stores but I gave them sugar syrup anyway. Should I remove the empty frame and add another frame of BIAS to the centre or merge them into another hive (that’s had CB)? I don’t think I can merge them back with the original hive as it’s a long lang. I didn’t see a queen and didn’t expect to. The bees were calm.

I assume there were not too many eggs in the three frames I gave them and/or they succumbed to chalkbrood. They seem to be on top of the CB now.

Recommendations appreciated with thanks. 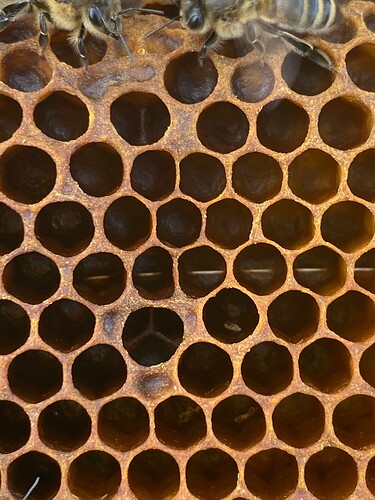 Hi @Outbeck , I would be inclined to give the colony another frame of BIAS, especially a frame that is mostly brood, especially sealed brood, as well as a few eggs.

A full frame of brood will give a weak colony a good boost in population. Any sealed brood will emerge no later than 12 days, so therefore the more sealed brood, the quicker the population will build.

Thanks very much again Jeff! I’ll do that this week when/if the rain stops for long enough!

I was thinking I’d need plenty of eggs in the brood frame to try again for queen cells.

Hi & you’re welcome. They don’t need a real lot of eggs in order to make a queen. Sometimes in a vigorous hive, if you find a frame of sealed & emerging bees, if you look in the empty cells, you’ll find new eggs. I have an led torch standing by, in case I need to find eggs with no sunshine available.

We’re in the middle of a rain event ourselves.

There was no rain yesterday arvo so I was able to give them another frame from the original hive. It was overcast and windy so they weren’t that happy to see me. Thanks again and I’ll definitely try the LED torch trick as I generally can’t see eggs for quids. My cumbersome method is to take a photo and enlarge which usually isn’t all that practical.

Rain forecast for the next 8 days which I hope is incorrect! Poor bees

Keep at it. Sometimes it takes a few goes.

I agree with Rob, sometimes it takes a few goes. It’s not a BAD thing if a colony isn’t making a new queen, as long as we keep giving them good brood, that will keep the numbers up, including nurse bees. They eventually make a new queen.

It seems to affect us, more than them.

Update: I did an inspection on Monday and found a laying queen and BIAS. The sealed brood is probably from the second added frame. She was moving very slowly. I assume the single queen cell I found 3 weeks earlier was hers. This time there were also 4 or 5 queen cells

. We’ve had a run of nice weather with another week or more of rain starting tomorrow

. Their stores aren’t strong so will continue feeding.