Dead Brood out side

Hello all, here is the back ground.
I have experienced 3 swarms in the last month, one each week and the swarms are getting smaller.
Last Tuesday I noticed dead brood on the landing board and ground infront of hive A, this hive was suffering from a SHB attack, many beetles were removed from the hive via a vacuum cleaner, good bottom board captured many also. I inspected this hive with the others on Friday and found all seems to be okay but rather weak in numbers. Eggs, brood, food and queen all spotted. see here
I also did inspect the nuc created from the swarm, looked very strong, all 5 frames had capped brood with honey around the tops of each frame. Not many beetles either. The nuc had been in a new box with 5 new frames.
I had ordered a new hive however it hasn’t arrived yet and as the nuc brood would be imerging this week thought it prudent to swap some into the weaker hive to bulster the numbers and provide a bit more space in the nuc.
Today I went about doing this excersize only to find that the front of the nuc was piled up with dead brood, some fully formed and still alive, yet booted from the hive in the graveyard. All 5 frames had caps removed and brood removed. There were also large amounts of bees bearding around and below the entrance.
I have now placed the existing 5 frames in a bigger borrowed brood box with 3 aditional new frames in an attempt to give them somthing to do and the queen somewhere to lay while I awaite my new hive boxes.
Can you please tell me what has happened and what should I do to overcome this and move on.
Thank you in advance…
Ian. 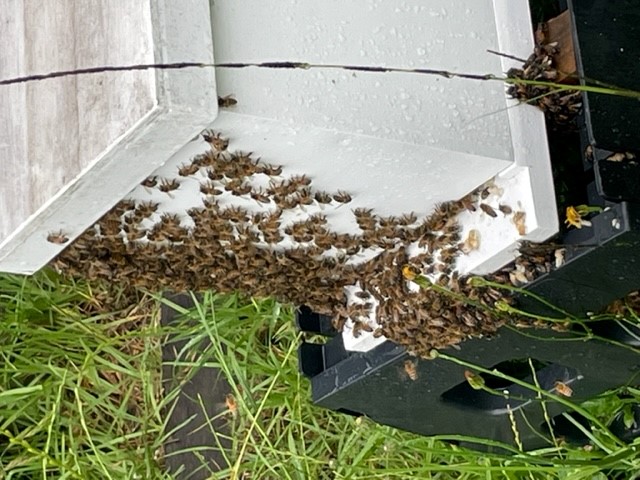 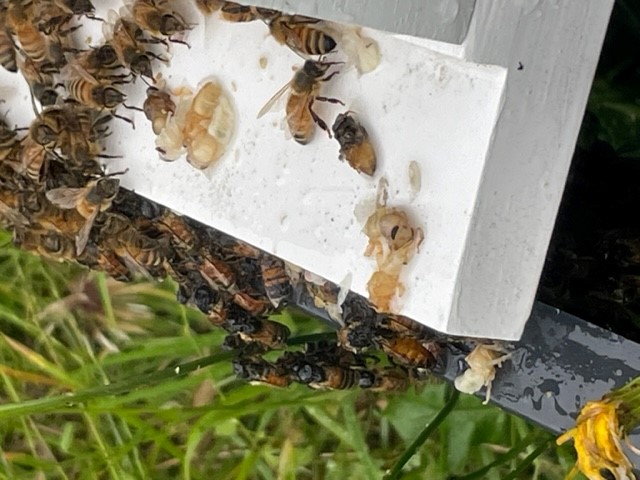 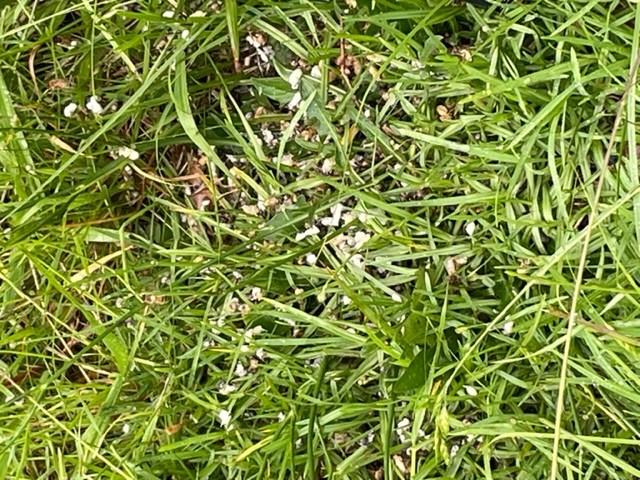 Hi Ian, could there have been a honey or oil spill inside the hive? The pupae and one worker on the landing board look like they’re saturated in something, and so do the workers in the mass just below in your second pic.

hello @Eva, yes it had been raining all afternoon, they were drenched. Most of the bees had gone under the nuc for protection. There wasn’t a great deal of honey in the frames each frame would have been 90% capped brood on fridays inspection. Unfortunatly I didn’t get any photos as I was thinking it was all good and normal.

I couldn’t say for sure, but when you say 90% capped brood on each frame in the nuc it leads
me to wonder if this colony simply didn’t have enough to eat plus feed all the new mouths about to emerge. So, perhaps they took this action?

Thank you yes I did mention SHB and they are quite prolific here at the moment @JeffH, however in my limited experience I didn’t think the hive had an excessive population. I do have 2 beatle traps in the nuc.
If its lack of food so many yonger bees and not much honey stores, can I feed them outside the box? what of the other bees in the area? there is quite a few flowing trees about at the moment.
I had a look today after putting them in a bigger box with 3 new frames and they have all moved in with only a few out of the landing.
I will check it again on friday to see if theyre progressing with brood and food.

Don’t look for beetle numbers in the hive. Only a couple will do the damage that it looks like your hive has experienced. With all of that discarded brood you’re seeing, you should also be seeing comb that the brood came from looking fairly in tatters.

I don’t think that lack of food caused the problem. I wouldn’t feed the bees outside of the hive. I would simply give the colony a frame containing some honey.