Background: Three Flow Hives established in April 2017 from Package Bees. Hives are located on a single wooden rack. We are also in an odd sun/rain cycle here with very high levels of rain every two or three days…lots of water.

I titled this post “first impressions” because in my previous many years beekeeping, the SHB was not a noticeable problem in my area (East Tennessee). Now starting up new with Flow Hives after being out of beekeeping for several years, SHBs are a noticeable pest which must be dealt with or at the very least monitored with greater vigilance.

All of our Flow Hives are VERY strong with bees having given the new packages two full-depth, 8-frames plus 1 brood boxes and new queens (in the packages of bees). So here’s what I’ve observed with SHBs:

Note: This is NOT me in the video above.

Spread Combat Roach Gel (active agent: fipronil) inside the CD case (or commercial version) then close the case. Double check that the openings are NOT large enough for bees to enter.

Place the trap on top of the fuzzy tablecloth backing then slide the “assembly” back into the screened bottom board of the Flow Hive. Since the assembly is BELOW the screen on the bottom board, the bees are not close to it and it is no where near honey for the bees or for you. Though there is a VERY mild smell to the gel, the bees do not seem to pay any attention to it.

Beetles have a VERY strong sense of smell. Studies have shown they can detect hive odor from a distance of 10 km, so they will find the trap quickly, enter it, and consume the gel. Since the fipronil is fast acting, they die quickly either in the trap itself OR crawl out only to get caught by the fuzzy tablecloth material…then die.

In my own testing, within about 4 hours, about 50 beetles were dead in the trap or on the fuzz. The trap itself contained about 25-30 dead beetles…the rest were dead or dying on the fuzz. 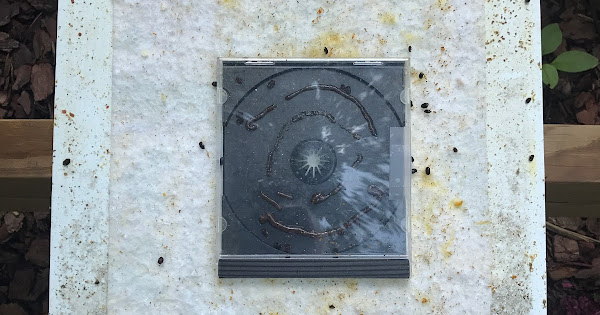 While some beekeepers might loathe the idea of using chemicals or poisons anywhere near a beehive or honey, this approach is non-invasive and is a low probability method for any potential impact on bees or honey. For me, I’m not willing to declare all non-natural approaches are bad just because they use a different method.

The fuzz also helps to minimize any potential for dying beetles to re-enter the hive by catching their legs but even if a dying beetle climbed back up into the hive through the screen, bees don’t eat beetles but rather carry them off for disposal…just as with their own dead brood or bees. So I think the risk is extremely minimal for any problems with the bees. Ditto since stored honey is typically far away.

I’ve also noted that a dying or injured beetle is much easier for a bee to catch than chase an often fast-moving healthy beetle around.

There is also some work that shows promise in trapping beetles through lures as has been done a long time with Japanese Beetles…something that is easy to try.

A great writeup on SHB is available here:

So that’s where we are now. I’ll update this as we see more on our saga with the beetles.

2017-07-07 Update.
Using the CD case/roach gel, the beetle population has taken a MAJOR nosedive. There has been ZERO effect on the bees as the CD case is located BELOW the screen on the bottom board. No beetles were observed in the Flow Super frames where before 20-30 had been isolated in cells guarded by bees. Only one or two beetles were found dead or dying in the CD case now and/or on the fuzz board on which the CD case sits. Only 1 beetle was found in one hive on the inner cover. The mild smell that the roach gel gives off seems to be very attractive to the beetles. The bees don’t seem to pay any attention to it. So for now, I’m very pleased with this approach.

2017-07-08 Update - A Very Interest Event
Yesterday while reinstalling the queen excluders, I smoked the bees much more than usual to drive them down into the brood boxes so the excluder would not harm any when I laid it down. Today, I pulled the CD Case out in each hive and found a massive quantity of dead/dying beetles…FAR more than I have ever seen before. I vacuumed up the beetles with a small portable vacuum cleaner (I have AC power in my beeyard) then dumped it into a bucket of soapy water to kill the beetles. See photo: 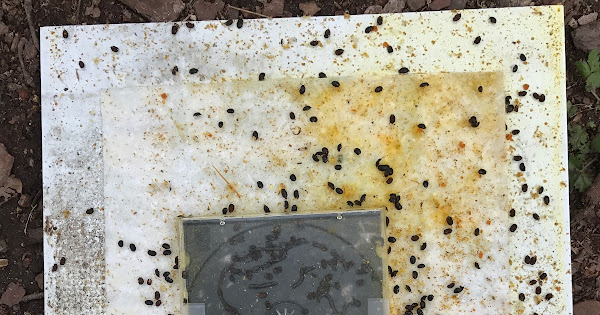 Compare this second photo to the first photo at the top of this post…many more dead beetles now that before.

I don’t know if the smoke and/or the massive downward motion of the bees yesterday stirred up the beetles or with more bees in the brood boxes than normal, did they just herded the beetles through the screened bottom board. Either way, the amount of dead beetles was amazing in what I consider to be a very strong hive of bees.

So the CD Case/Roach Gel combined with the fuzz board is having a tremendous effect on the beetles.

I plan to do a drench ground treatment via a watering can then wait a week or two for the drench to become inert then to apply nematodes (for insect class “Coleoptera”) that kill beetles while they pupate in the soil. The nematodes were available from Amazon.

"Biological control through beneficial soil nematodes specific to the SHB is also effective. Nematodes are microscopic roundworms found living naturally in most soils. Many species of nematodes exist and each has a peculiar function in the environment. Also they pose no threat to the environment and are exempt from registration and regulation by EPA and FDA.

Beneficial nematodes are used by applying them to the soil while suspended in water. They may be applied as a pressurized spray or simply poured from a watering can. Nematodes applied to soil burrow downward in search of insect pests. Once found, nematodes enter the body of the insect and release a powerful bacterium which quickly kills the pest. Released bacteria dissolve the internal tissues of the insect which becomes food for nematode growth and development. Matured nematodes then mate and lay eggs to produce more nematodes within the dead insect. Several such generations may occur over just a few days. After the inside of an insect is consumed, tiny infective stage nematodes leave the dead insect shell and begin searching for more pests. As many as 350,000 nematodes may emerge from a single dead insect after only 10-15 days. Numbers depend on insect size."

So using nematodes as a biologic control for small hive beetles appears to be something to pursue as they are soil-dwellers (isolated from the bees themselves) and have no biological predilection to affect bees in any way. They are also self-proliferating so “re-seedings” of nematodes probably isn’t necessary.