If a flow frame isn’t 100% capped and is then cracked open for extraction, would the pressure of honey flowing down the inside of the flow frame be enough to force honey out of the uncapped cells and into the brood box below?

I extracted honey today from two frames which looked to be fully capped (see first pic). About ten minutes after I turned the key, I had honey flow out of the bottom of the hive and around the coreflute. (See second pic) 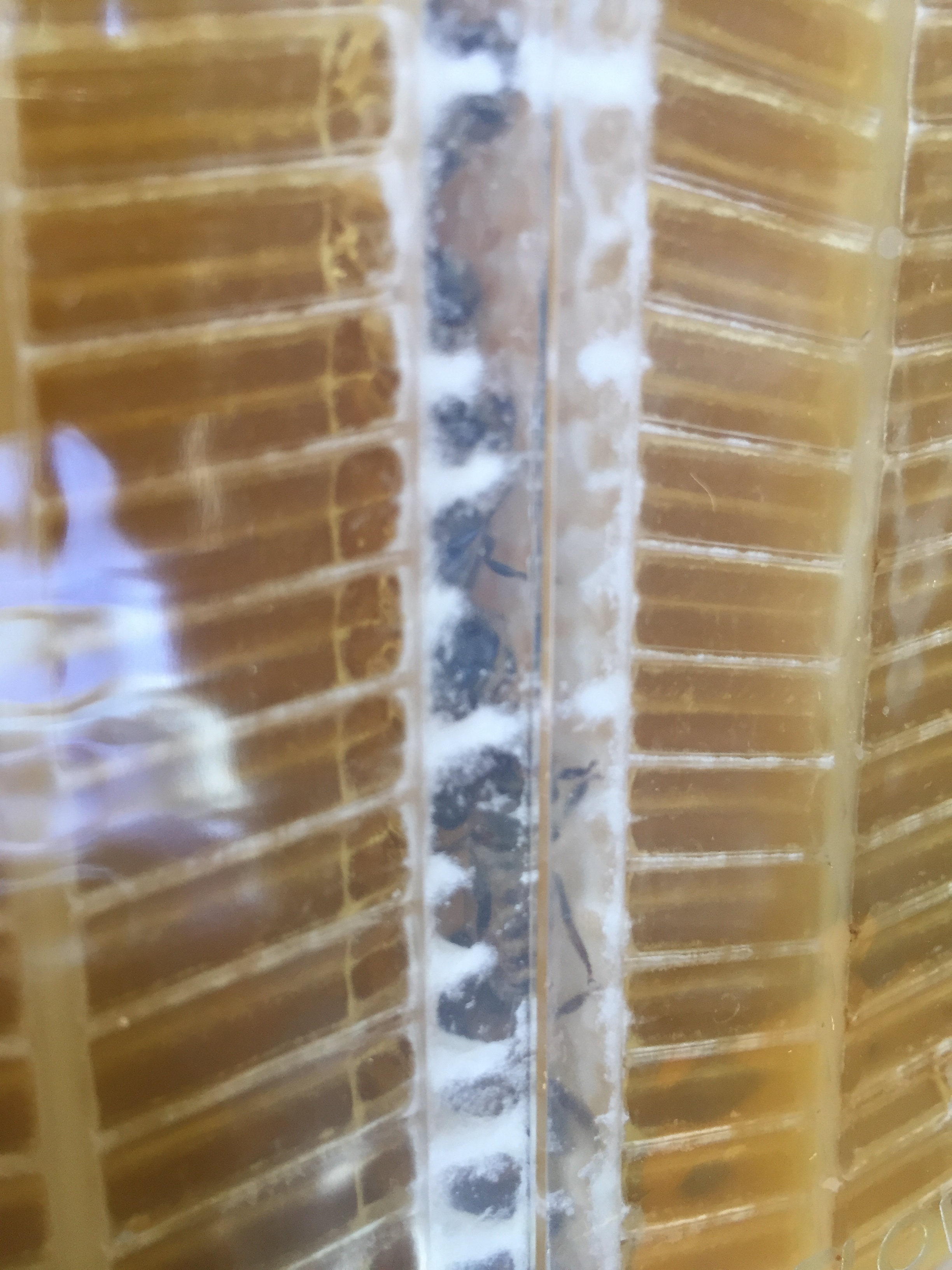 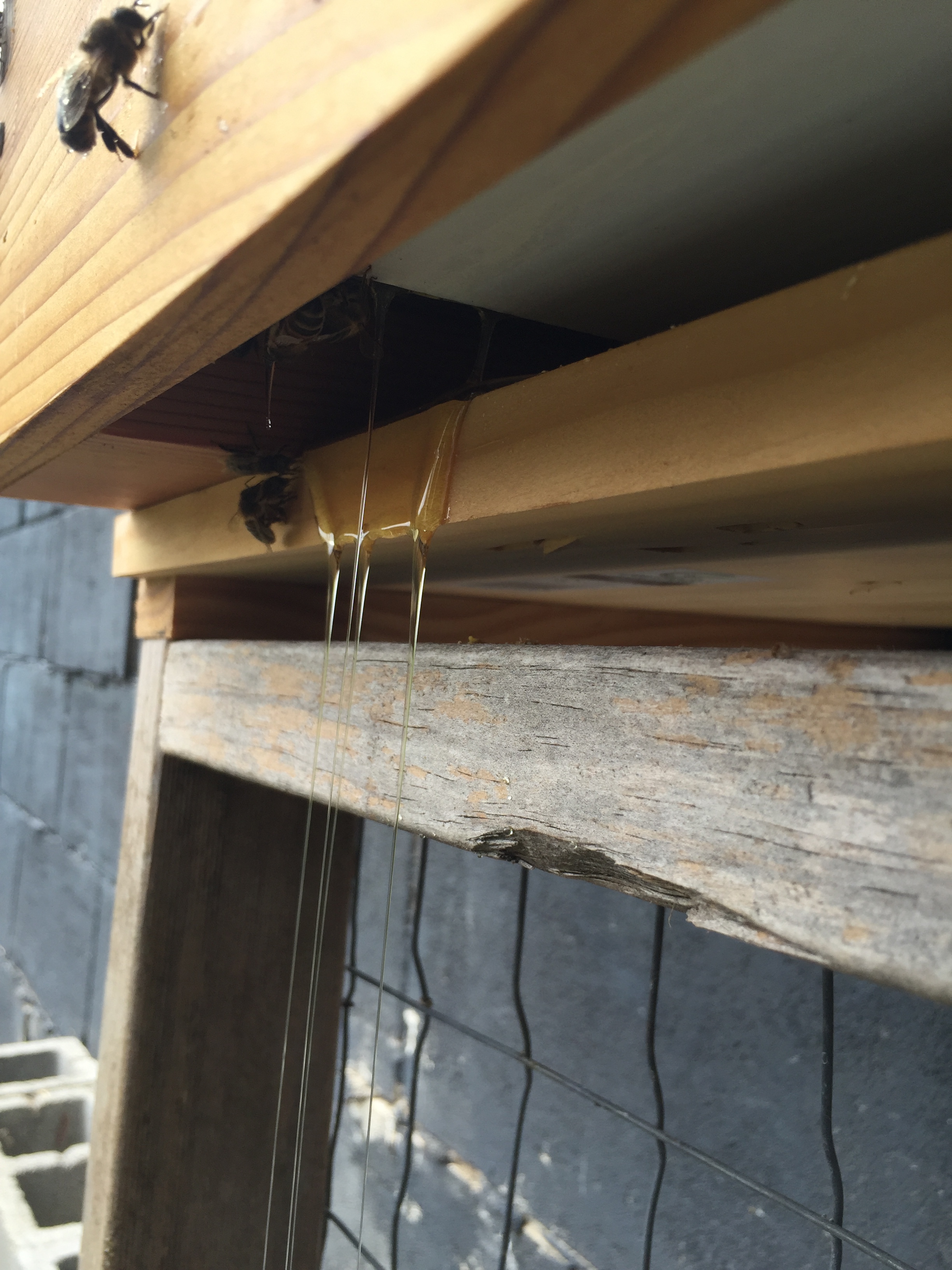 Honey out of bottom of brood box.

Any opinions would be greatly appreciated.
@FlowHive

Bees all outside after honey harvest
Refilling Activity in Flow Hive
Has this happened to anyone else?
Bruce_Choate February 16, 2016, 1:41am #2

Next time try inserting the key about a 1/4 of the way and crack open a section at a time, it’s been mentioned that it help with preventing overflow situations.

@Bruce_Choate Jimmi should be able to operate the Flow hive the same as in the video of the crowd funding campaign.

Actually, that is an interesting question…

I’m harvesting in a Sydney summer, so its pretty warm, usually in the 30s or high 20s at least and the honey is pretty runny.

Let’s say I was to open the complete length of the frame all at once, I would estimate that maybe 80 percent of the honey is out within the first 10min, however for the last 20 percent to drain out, it probably takes another 20-30 mins. So I just leave it and come back.

However, I’ve noticed that if I do open the entire length of the frame at once I get problem with the initial pressure being so great that the honey actually bursts out of the lower capped rows of the frames and runs internally down into the brood box and out the bottom of the hive onto the corflute.

Doing it this way takes longer (60+ mins per frame) but spills less honey.

I’m not sure if other people find this happens or my bees just don’t make strong caps? Its definitely capped - I’ve checked.

from another user, to a response about same issue.

60 plus minutes per frame & spills less honey, does that mean you still spill honey? Even though the frame looks capped from the end, there maybe a large section uncapped in the center which could contain very runny unripe honey. I wonder if that’s the problem.

This year for me … I’m starting three new hives …, I’ve spent this winter building n assembling my three separate hive setup. This first year my goal is two fold: (1) get colony to drawn out two deep 10 frame langs. Our seasons vary all over the place n are not hugely long so hoping great blooms with little or no drought. We do get one burst of fall nectar n pollin but that can be long or short. (2) get the success of winter over. Condensate n enough stores/honey are my two main challenges n goals. It’s been 55 years. Maybe more will return to my brain. Many things have changed stateside. But what the heck.

there maybe a large section uncapped in the center which could contain very runny unripe honey. I wonder if that’s the problem.

Yes. I think you might have to look at the frames …ie pull them out first?
This spilling honey thing worries me.
In the UK that would lead to major robbing, bees and wasps!

Well done Gerald. I guess varroa & shb wasn’t around then. I’m sure it will all come flooding back. What was I doing 55 years ago, probably at high school. I could never figure out algebra & trigonometry then, so I probably wouldn’t be able to figure it out now.

Yah ! Your correct… Neither of those were an issue which might have been to my disadvantage. I was lucky … I was more of a bee-haver back then. If we lost a colony we could usually replace with good strong wild swarms. Hind-sight is already making me a beekeeping as I work with my mentors one hive that was a late season swarm but seems to bee still healthy n making it. We aren’t out of the Proberbial Woods yet but they seem to be going to successfully make it thru our mild/cool n damp winter. We are more than 3.50" ahead of our rain averages do been difficult to get several dry days in a row ! Spring seems to be popping all around us now so our bees (good or bad) are ramping up n trying to forage. This is a great leading event for me this Spring. We are watching they don’t run out of stores (pollin n honey).

As for the algebra, geometry n trig as well as grammar. I’ve probably forgot most of that. Most of that math back then was dry n unusedful at the time. Then I took up sailing n had to put it to use plotting out a sextant position. Wow ! So that was what geometry was about. Made sense than. (Now that’s all done with a GPS. Life moves on n what I learned at times once again becomes valuable.

I harvested today and had leaks from 2 out of 4 frames.

It was particularly thin. I’d opened the hive beforehand. The frame that leaked the most 500g was a 100% capped one. I did open it all in one go.

The things i’m wondering are

if i needed to tilt the hive more. It was def sloping back but maybe not enough.

There was a slight tilt to the left but i dont think enough to make a difference.

The frame that leaked most had a vinyl tube attached to the discharge pipe hanging off it into the container. It was extra weight on the pipe and so it was hanging slightly lower. Maybe the weight meant it didnt plug into the bottom fitting properly. I tried to adjust it a few times but assumed it would be ok.

Only read n not personally seen yet !! They say that it is best to partly open each frame The pressure of all that fast running “gold liquid” hits the bottom n fills the bottom reservoir then needs a path if it can’t get out the tube fast enough n leaks out some of the cracks n lower cappings because the dam has broken. I’d try slow, partial, easy to see if that helps. Several have written this issue here someplace.

I tried to adjust it a few times but assumed it would be ok.

Did you notice whether the little lip on the flow tube went properly below the base of the channel? If it didn’t slot properly below, then the channel to drain honey into the hive would be at least part open while you were harvesting. Tricky to get it in right - while I was playing with my Flow frames, I only got the tubes in correctly about 3 out of 4 times. When it went wrong, the lip on the tube pushed above the base of the channel. It was useful to practice before the frames were full of bees and honey!

Dawn, like anything … It’s a learning curse n process I guess. I plan on ordering the wider 7 framer if still available this Fall or Winter … Or Heck ! Might blow my winters savings n go all new normal Eight Frame with extra super from Beethinking … Not sure yet. That means I need to order at least one new Nuc next Spring 2017. Guess I’ll cross those bridges this Fall.

Unless one of your existing hives is strong enough to split by then!

Hmm ! That’s true ! Guess I’m still thinking old school. I might have my own resources FORSURE. Thankz for getting my horse blinders off ! I keep thinking about where I am now n not where I just might be next season this time. Thankz Dawn ! Appreciate the notes ! It’s been awhile n things have changed. Gerald

Sorry bug you… But what is a “Play Cup”? Is that the same as a Queens Cup n can often be seen here n there on a mate colonies frames ? I’ve seen the Queens Cups several times in this Springs beekeeping classes. So far they had been totally empty. No hurry on the answer. I was just ready Dee n Your comments on that confused Little Ole Lady that Villi was tossing too much book info at !

Sorry bug you… But what is a “Play Cup”? Is that the same as a Queens Cup

Yes, it is just a queen cup, but the description is trying to convey the hive intent. The bees are just practicing and playing around - they probably don’t intend to swarm, but they need to learn how to build the cups. They do it often when there are plenty of resources in the hive. If you destroy them, they will just build more. Unless you need candles, just leave them there!

OK, joking about the candles, but I think you know what I mean.

Dawn … Thanks a bunch ! Yah !! Our teacher said to leave them along because they were usually just practice cups.

Hmm, all my candle are LED anymore. And I was a serious camper so have plenty of white gas, kerosene n LP gas lamps n stoves here. Vera n I use to have a complete cooking set up for cooking for youth groups. Then we also lived n worked in the forests for 10 years. Glad we did that while we were still younger. I love the fragrance of bees wax a lot.

Well, supper is over 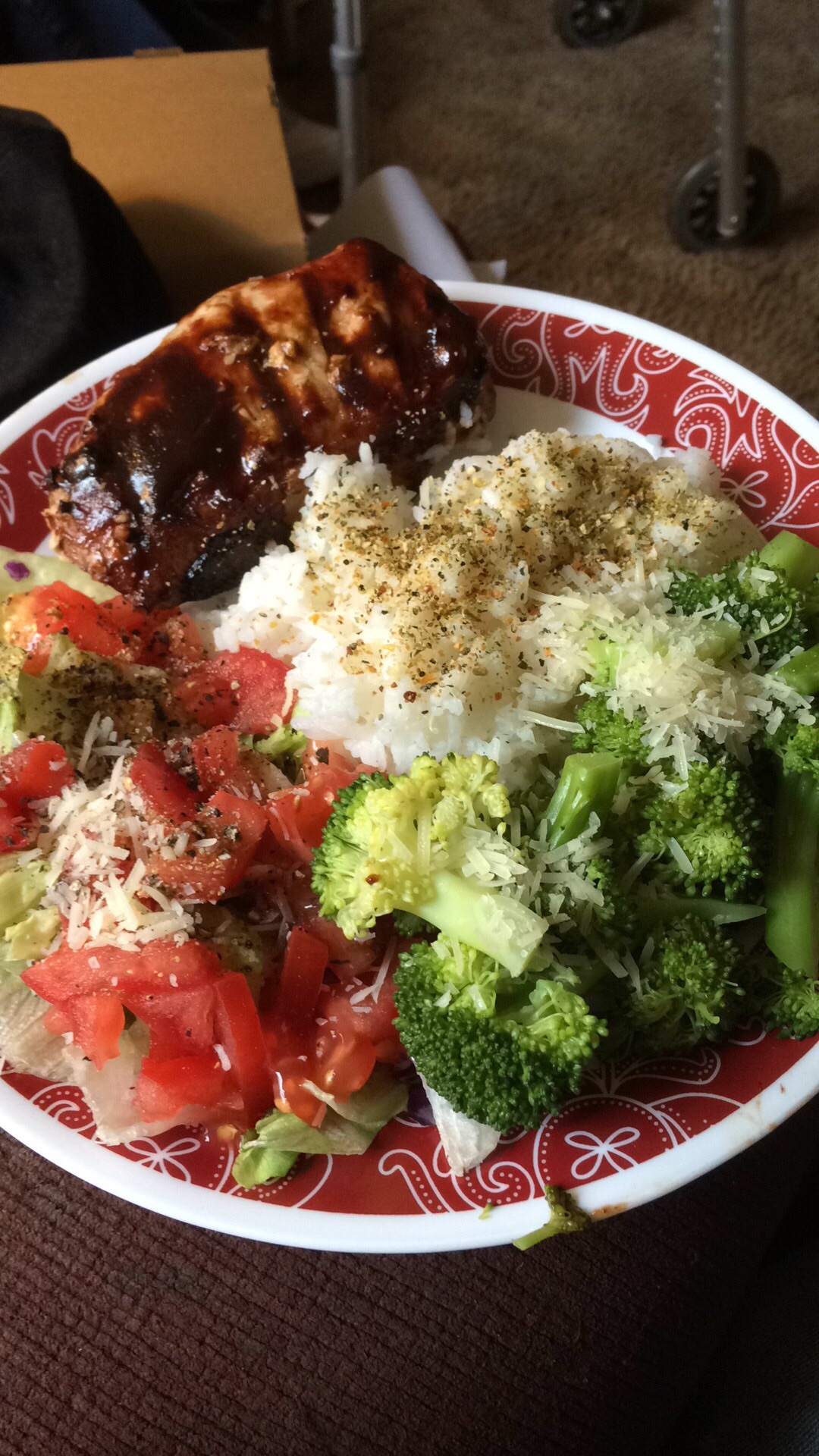 I was careful to get the lip in place but had a vinyl tube attached to the acrylic to extend it and wonder if the weight it meant the tube didnt sit tight. 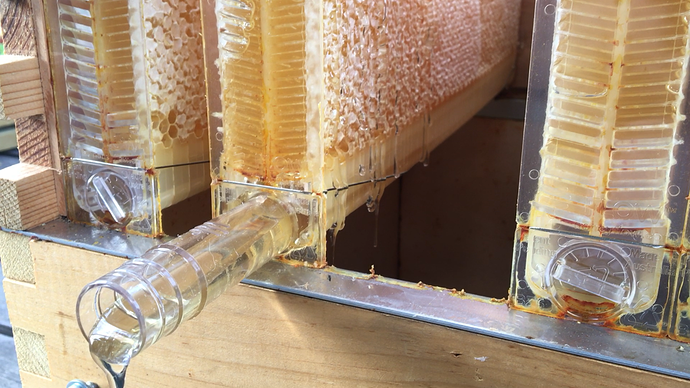 image.png1536×864 1.65 MB
We’ve been having similar leaks as mentioned above. The frames were capped, with the exception of one or two cells, and the honey seemed to come out of everywhere, not just the bottom. Outside temperature was always above 30 degree when we were extracting, and the hives were always in full afternoon sun. Leaking happened even if we just cracked 3 or 4 rows. We made sure that we had a good angle on the box and the flow out of the spout was only around 75% capacity, to reduce back pressure.
Our worst extraction day, before we realized the extent of this problem, approx 1.5L of honey, maybe more leak from 3 frames, killing a large portion of our bees. Luckily the queen survived, and the hive recovered.
Since then we’ve been pulling the honey super off before extracting. The photo is from one of those days.
Everything else about the frames is good, pulling the super off prior to extraction is preferrable to hauling all the frames to somewhere to get them extracted, especially when we only have to two hives.
Next summer I think we’ll try extracting early morning before the temperature get to high. Any thoughts on the ideal temperature?
1 Like
next page →