I got a nuc at the very end of June. I transferred them to the flow hive. They requeened at least once and are doing pretty well. I don’t have any supers on and they have about 4 frames if honey in a 10 frame hive. It seems cooler then usual in pa. Should i be feeding them 2:1 syrup or sugar candy? I heard they won’t take the syrup if it’s under 50° but I’ve heard others say that if it’s not frozen it’s okay. Any advice would be helpful. Thanks!

Hi Ashley! I’m about an hour east of you

I put these in my hives that seem light on stores and watch to see how quickly the bees take them: 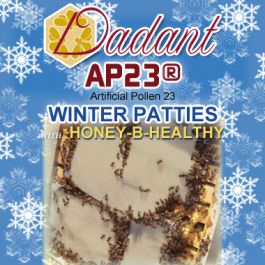 Due to melting point, we will only ship this product when temperatures drop to 70 degrees or less. High carbohydrate feed contains Sugar, AP23, and Honey-B-Healthy. 2.5% Crude Protein  Pack of 10 patties

Other suppliers sell them too.

Thank you so much. I think you answered some other questions for me previously. I appreciate it. I’m new and I’m learning but it’s overwhelming sometimes.

Do you wrap your hive over the winter?

I am in Columbus oh, I wrap and insulate the tops my hives if I have enough supplies…

I am in Columbus oh

Hehe, reminds me of a silly joke about how Canada was named…

Yes, I use hive wraps that slide over the stack like a big puffer coat, plus insulation under the outer cover. The latter is the crucial one - as in, if you only did one thing, that would be the one because it avoids the problem of condensation raining down into the cluster.

Do tell! Not sure if I know this one.

Would something like this work? Also, do you do anything to the bottom? Since it’s grated?

Looks like it’s intended to go with this particular inner cover, a lot like what I rig up using a shim and pieces of rigid insulation - 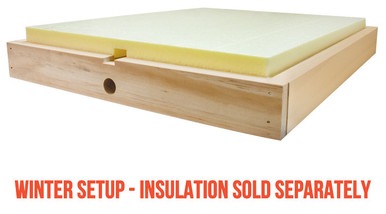 The Wintering Inner Cover functions as a traditional inner cover for the warmer months but can also be used during the cold months! Shop Now

the bottom? Since it’s grated?

You’re talking about the screened bottom, right? You should slide the core flute board into the topmost slot, and it wouldn’t hurt to block the back opening from drafts also. My hives are on screened bottoms that I converted to solid bottoms & sit on wood benches, so I shove more of the rigid foam insulation pieces underneath them at the back. This also prevents mice from nesting in there - not that they could enter the hive from under there but they do a lot of chewing, pooping etc.

Ok, this one just might translate to written form so here goes - with apologies in advance to @Doug1!

Once upon a time, there was a small group of fellows who were out hunting in the woods of the great white north. As night began to fall, they set up camp. While they enjoyed their fresh-caught dinner around the fire and chatted about their adventures, they all agreed that this was a fine and wonderful place to be in, and that it should have an equally fine name.

After some puzzlement over a suitable name to give this beautiful country, one of the hunters said - “Hey, I know! Let’s just put some letters in my hat and we can each pick one out and see what they spell!” The other hunters liked this idea, so he wrote all the letters down on a scrap of parchment, tore them into single pieces with one letter each, and placed them deep into his hat so no one could see them when it was their turn to choose.

Everyone was curious - and excited - to see what letters would be picked, and what they would spell! The hunter graciously passed his hat to his companions to begin.

The first fellow reached in and drew out a piece of parchment, looked at it, and announced “C, eh?” He passed it to the next man, who did the same and said “N, eh?” And then the last man chose his letter - “D, eh?”

The hunters all celebrated, congratulating one another, and that’s how Canada got its name.

The first fellow reached in and drew out a piece of parchment, looked at it, and announced “C, eh?” He passed it to the next man, who did the same and said “N, eh?” And then the last man chose his letter - “D, eh?”

When should I wrap my hive?

I try to have my last inspections done and wraps on before the nighttime temps drop below 45 or so. Mine are done now.

Mine are already wrapped too - really the question is better posed as when should your hives not be wrapped… but it is inconvenient to inspect during the spring and summer when they are wrapped so that’s my rationale to not leave wrapped year round.