Was out checking the garden last night and spotted a swarm on my wisteria frame. I was waiting for a swarm because I wanted to put them in a top bar hive without having to cut any comb. Got some stings through my suit, one got in my suit- no idea how- stung my belly.

Managed to get them in the hive, super excited! Later that night there was a massive thunderstorm and a quick heavy downpour. I guess that was one reason the bees were cranky.

Today is supposed to be super windy so the bees (hopefully) won’t have a chance to disappear on me. 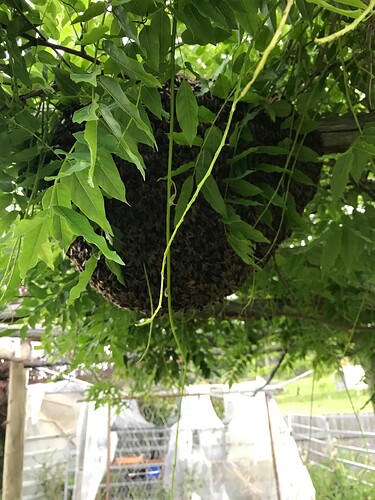 Nice size swarm. A few stings are part of the game

Be careful, catching swarms is addictive….

So this evening I noticed two more swarms in my almond tree. These look like after swarms. I didn’t spot them until about 8:30pm and darkness was fast approaching. By the time I got suited up and the ladder out the bees got pretty stroppy pretty quick. So I noped it out of there and will attempt to capture them early morning.

So my question is did the bees get stroppy because night was falling?

I wanted to check on the hives today but it was cloudy with a top of 15C, which wasn’t too bad but the wind chill let me down. The weather has been all over the place since I caught my first swarm and I have been itching to see how they fare. 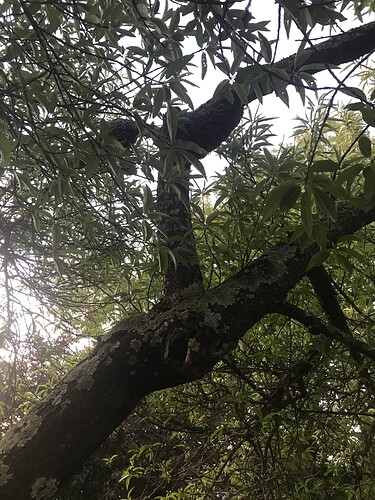 Morning all. I captured one swarm successfully I think but the other was a tad more difficult. There are still leftovers on the tree and the majority that I put in a hive have disappeared. I don’t know where the virgin (?) queen is or whether the bees went to the hive 3’ away.

I was wondering @JeffH , the hive these bees came from is nearly empty. Probably has about 2 frames of bees, maybe less. I knocked out all but one queen cell which is capped. Should I put these bees in a nucleus hive or just see how it goes? We don’t have shb here and I haven’t seen any evidence of wax moth.

All thoughts and opinions are welcome.

This hive has produced 3 swarms so there isn’t very many left in the hive. I am not very good at spotting the queen so virgin queen spotting would be even harder.

Should I wait 2 weeks for the virgins to mate and start laying then pick one and recombine?

Hi Kristal, I would keep the weak colony in a brood box, on account that, with sufficient resources, you can quickly boost the population again… Baring in mind that winter is a long way away.

I’m also a bit confused: At first I thought the swarm you caught took off. Then you mention “recombine”. So it appears that you have a captured swarm, plus the colony that issued the swarms. Because I’m addicted to new queen bees, I would let each colony carry on with their new queen, provided they successfully mate.