Flow hive success in Northeast US (with bee survival?)

Going into year 2 of the beekeeping life style.

Year one saw us get our first set of bees from a local breeder (Russian Carniolan localized cross). Bees swarmed twice early on. I had 2 brood boxes and a flow supper but the bees did not register the supper as available space apparently.
The hive re-queened and I fed aggressively in the fall, but they flew the coop sometime mid-winter and were nowhere to be found during a late February inspection.

Year 2 - got a larger set of bees / frames (15 frames) and leveraged some of the left over honey from the previous year. Population was booming (filling in 3 brood boxes nicely with mix of brood/pollen/honey) so we added the flow hive (with some wax and a bit of syrup brushed on). No activity outside up at the flow-supper other than just some bees walking around and checking things out.

My bee provider asked if I knew of anyone on the forums in cold climates who had bees successfully fill the flow-hive AND survive the winter. If so, how long had you had the hive/bees previously and how long until they started working the flow-cells?

Somewhat frustrated and looking at the possibility of moving to traditional suppers next year, but hoping to hear some evidence of success and bee survival with the flow-hive in the northeast (Northern VA area is specifically where I am).

I’m colder than the Northeast. I don’t leave the flow frames on in winter. I don’t want the cluster to end up where the queen can’t lay and I would never winter bees with an excluder on. They worked mine as soon as I put it on in a flow. They don’t work it when there is no flow and there is other room in the hives.

Thanks Michael. What type of bees do you have? I assume your hives are surviving the winters?

Last year the bees chose to swarm vs. using the flow hives to store honey. They didn’t read the flowhive as available space. Have you ever found them bolting instead of using the Flow for storage space? Thoughts on managing that balance of space so they don’t think of swarming?

Curious if the type of bee has something to do with this.

Have you ever found them bolting instead of using the Flow for storage space? Thoughts on managing that balance of space so they don’t think of swarming?

Several people seem to have observed this. I think it is more likely to happen if you have not put wax (burr comb, or melted wax) onto the plastic frames. They don’t really smell like a hive to bees, as there are no bee pheromones on them. If you just splodge a few blobs of burr comb from an inspection onto the Flow frame faces, it encourages the bees to treat them like part of the hive.

Curious if the type of bee has something to do with this.

However, it looks like Russians and Africans are very swarmy too:
http://forum.honeyflow.com/t/types-of-queens/6567/3?u=dawn_sd

I have mutts. Mostly from cutouts and swarms but sometimes from other bees that had survived. Most survive winter. A few die every winter. Were you using an excluder? Sometimes it works better to leave it off until the bees are working the supers. I leave it off altogether, but I also have 20% drone comb in my brood boxes. Beginners using foundation over an excluder often have the same issue.

We are Seattle beekeepers, running one hybrid Flow. We have definitely noticed a pattern of bee-avoidance on our Flow frames both last year and this. The four deeps on either side of the flow frames were filled with lovely cut-comb honey, but the bees seemed reluctant to fill the plastic Flow frames. Last year they filled them up partway and then relocated all the nectar lower into the hive. This year, they only worked on two of the four frames, but did cap enough honey for us to tap one jar full late season.

We also have been wondering about the problem of starting with new bees in the spring, as we have lost ours to yellow-jackets and cold wet spring weather. Over-wintered colonies are often slow to build up too.

I have been scouring the Flow Forum this week, hoping to find others that share similar challenges so we can share and compare stories and strategies.

Some photos from my blog and my August peek into the hive: 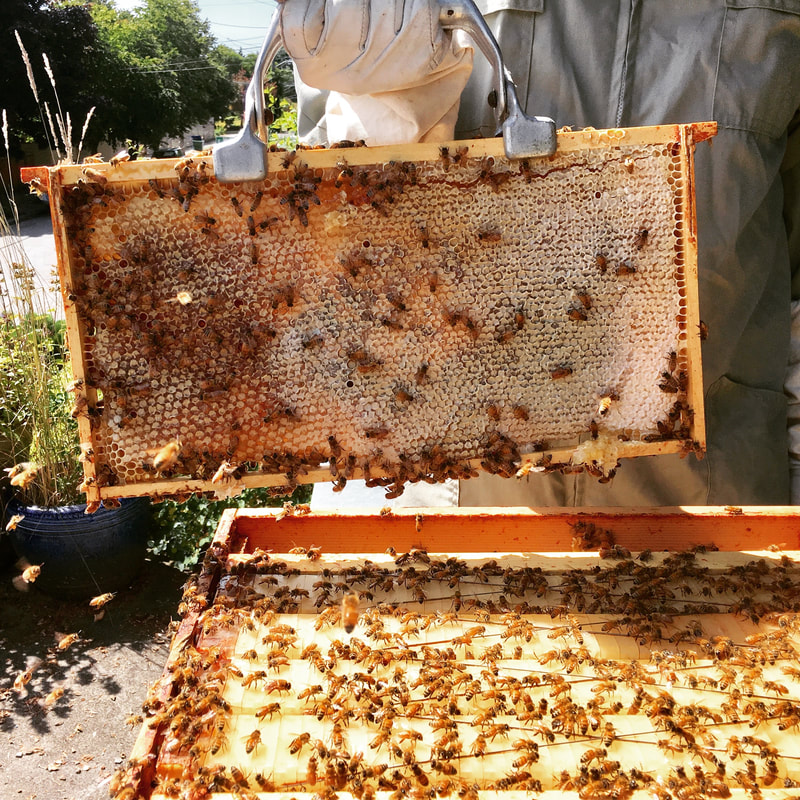 August check-in: the bees in our Flow Hive have been busy building cut-comb deeps and are slowly filling up the Flow frames. Hmmmm. Yesterday I decided to dig a little deeper and I ended up...

thanks for any insights!