This is what prompted me to become a bee keeper. During a road project in front of my house this October a dead maple tree with a 10+ year old hive was cut down. I couldn’t find anyone to take the bees & not wanting them to just die I had the tree relocated to my backyard, lying down entrance protected & everything I could find to help protect them till spring. IF they survive. How do I get them out of the tree and into my hive?
I’m in North-eastern Pennsylvania USA where it was -4 degrees F here two weeks ago. Thanks

Best way would be to wait until spring and then use a chainsaw to split the log. Carefully cut out chunks of brood comb and rubber band them into frames. Do your best to find the queen and place her in your hive and everyone else will waltz right in. They would need to be fed after all that disruption.

While it is the off season I suggest reading some literature on the topic.

Hope it all goes well for you and the bees.

Balmy at 5F down here in SE PA then, Joe

Good move getting that trunk out of harms way. I have a feeling your colony will not stick around long once it warms up, so I’d proceed with Kristal’s advice in very early spring. I did a similar rescue last summer, with weather and a tree guy for a husband on my side. The customer having the tree removed was kind enough to let me work on salvaging the colony over a few days while the trunk laid on the ground in their front yard.

I could see an upper and lower entrance in between which I surmised was the bulk of the hive, so I had my husband cut away a rectangle section of the trunk, about the size of a cooler lid. A lot of comb suffered the effects of gravity from being sideways in layers and ended up with lots of sawdust, so I found it nearly impossible to save much brood. I also found that there was yet another entrance, much higher up in a skinnier part of the trunk.

The upshot is that I saved a lot of workers, plus those almost ready to emerge from a small amount of undamaged brood comb, that I was able to merge with one of my colonies after the rescues proved not to have a queen. I think the queen had either been killed at some point or skedaddled up the chimney - possibly the latter because there remained a contingent of workers close to the opening inside the cavity that led to that high entrance. If so, they perhaps got a third chance because the trunk was taken to my husband’s work yard. From there they (hopefully) absconded to somewhere more secure, because when I checked on them a week later, a dormouse popped out to see who had the nerve!

A note of caution - there were a lot of small hive beetles, which I squashed as I went and put a trap into the box I housed these bees and some of their banded comb in. When I merged them I left out their comb and destroyed it since it was very old. So be mindful of pests & diseases when you proceed.

Lastly, based on the logistics of your trunk hollow, entrances, weather etc it might be worth considering a trap out vs a cut out. There are some good postings about both here, and I highly recommend watching some videos like @JeffH’s and Wilma’s tree cutout - a very nice demo of a challenging job as always

You’ll see how having the trunk still upright can be a big help, but we do the best we can.

Share some pics if you can! Here’s one from my job: 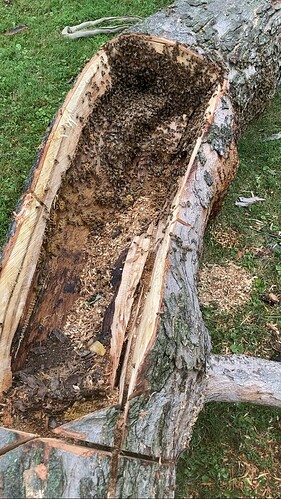 . That’s quite the opening cutout on that tree. Some more of the story. The tree was so big the guys tried to just cut the hive part off but they cut through the top of the comb, I found out later 18 inches of it. So they moved both ends to my backyard and I sealed the ends with wood & spray foam around the edges of the tree. I also put it on top of concrete blocks to keep it off the ground with an other piece of wood shielding the entrance from rain and snow. The entrance faces SE & I closed it up a bit and put a mouse guard on. The bees were active from October until the end of November maybe a week into December but not now. They would bump my wife when she was in the area, but not me?? They totally cleaned up the comb in the top part of the cut hive and moved it to the bottom part assuming that is where the queen is. 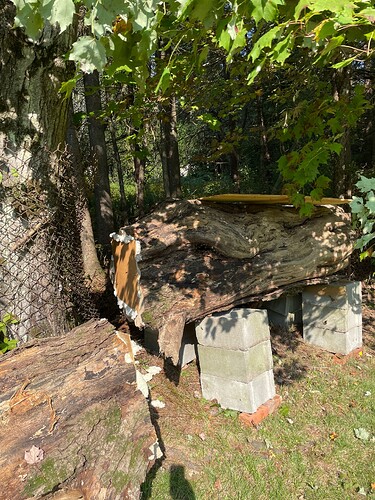 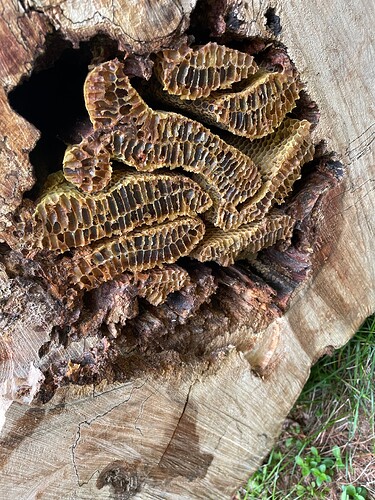 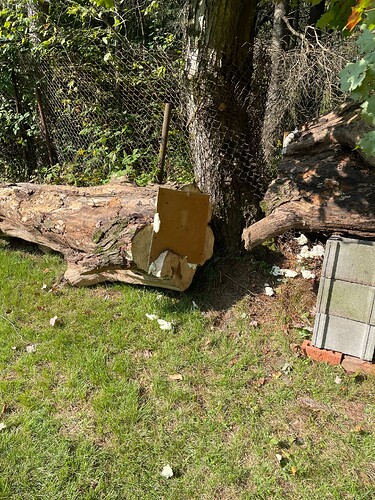 Nicely done, they are probably just as snug inside their trunk as they ever were thanks to your efforts.

They would bump my wife when she was in the area, but not me??

By any chance does your wife have dark hair, or wear anything scented that you don’t? One of my sons will occasionally get bumped while the rest of us don’t, and he’s the one with a thick head of dark brown hair

No, she has short grey hair, we were working in the yard moving brush so she wasn’t all perfumed up and she was wearing a reddish coat. And she was 25 yards away from the hive. I can walk right up to it.

Hmm. Only thing I can think of is that red appears black to bees, so it could have been her coat.