Is this a symptom of poisoned bees?

I collected a small swarm from a shopping centre carpark that was hanging low on a small tree. I Took them home and rehoused them into a new 8 frame box with a frame of BIAS. The next day at lunch time I checked on them to find this horrible scene 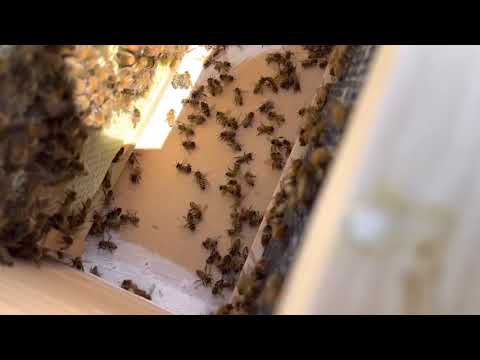 Is this an indication they were poisoned? It may well be that someone called an exterminator & he sprayed them with something prior to my collecting them.

Will the frame of BIAS now also be affected? If I go home today & all the bees are dead

will I be able to put the frame of BIAS back into another hive without passing on the poison to them?

Hi Ryan, apparently bees that have been poisoned, die with their proboscis sticking out. Your video certainly looks like your bees are reacting to poison.

It’s hard to say if the brood will be ok or not. It doesn’t look like the bees are spending much time attending to it. The sealed brood might be alright. The unsealed brood might die from exposure & or lack of attention from nurse bees.

You haven’t given us a background story of how you acquired the bees.

Thanks for the info Jeff, I mentioned at the beginning of the comment:

“I collected a small swarm from a shopping centre carpark that was hanging low on a small tree. I Took them home and rehoused them into a new 8 frame box with a frame of BIAS. The next day at lunch time I checked on them to find this horrible scene

I was informed there was a swarm there which had been there 2 days at least. So I just went & collected them into a NUC. They were certainly behaving normal at the time of collection. But today they were not so normal

apparently bees that have been poisoned, die with their proboscis sticking out.

I’m not sure whether that is an internet myth that everyone keeps quoting, or there is some science behind it. I can’t find a reliable source for this.

Reason I say this is because occasionally a bee or two gets trapped in my bee shed where I absolutely have no poisons, and they die on the window sill probably from exhaustion. They’re often with the tongue sticking out.

Certainly looks like they have been sprayed with pesticide to me

Sorry Ryan, I humbly apologize. Trust me to not read the first bit.

You would think that if they were sprayed before you picked them up, that they would have been all over the ground at the carpark, rolling around & dying.

I’d be a bit suspicious of that new 8 frame box. It may have inadvertently come into contact with something.

I think it was @Dawn_SD that said bees die with their tongue out when poisoned. Anyway it’s from this forum that I got the info.

I can’t find a reliable source for this

I think that these guys are pretty reliable, and they quote a reference:

I have had a hive poisoned when a neighbour sprayed open blooms in their garden. Many, but not all, of the dead bees had an extended proboscis. Having said that, other things can make them do that, including starvation, so it isn’t just poison that causes it.

Here’s an updates video from this morning. It seems to be a slow process for some bees to be affected. From Monday morning when I saw a heap dead at the entrance to this morning when there are only a few more dead. But as soon as I exposed the hive & they saw daylight some started moving erratically again, jumping off edges, crawling in random directions. Some die with proboscis out & some not.

Like you have mentioned Jeff, if they were sprayed whilst still a swarm, why weren’t they instantly starting to die? Why is it taking this long to kill them? And why are some still OK and others slowly becoming affected?

The hive box I used was new yes, but in a relative sense, I have used it with another swarm of bees prior to this one, and they were all A-OK.

Hiya Beaver, what did you put the swarm in when you transported it? Perhaps they were dead or dying when you dumped them into the hive and have been removed by the others?
Maybe, if the swarm was there for a few days they had no stores and starved when moved?
I’ve never had luck putting small swarms into large hives and like to have have nucleus boxes on hand for small swarms.

Yes I used a small 5 frame corfulte NUC when I collected them. They were all behaving exactly as expected. All in the box fine, fanning started immediately to tell the others where to go. Once most bees were in, I brought them home that afternoon & all was still going well till later in the day when I moved them into the 8 frame box.

And things were still looking fine even once moved into the 8 frame box. It was just the next morning the horror story began

Hi Ryan, thanks for sharing those videos. It’s a mystery, I wish I had an answer for you. There has to be a logical answer. You’ll have to chalk it down to experience.

Perhaps there’s poison on the plants they’re foraging. That tainted nectar could be stored and consumed over time therefore spreading the death over days instead of a single event like directly spraying them. Your other colonies might not be working those flowers so aren’t affected.