I’ve split two hives this season in Sydney, one is going great - the other one has struggled and i’ve had to add bees and a frame of BIAS on 2 occasions (thanks @JeffH for the advice on this method some time ago - it has been really helpful).

They’ve now created some queen cells which is great.

Since they’ve created what appears to be 4 queen cells - i was thinking about the possibility of cutting out the one on its own and transplanting that to a newly created split. 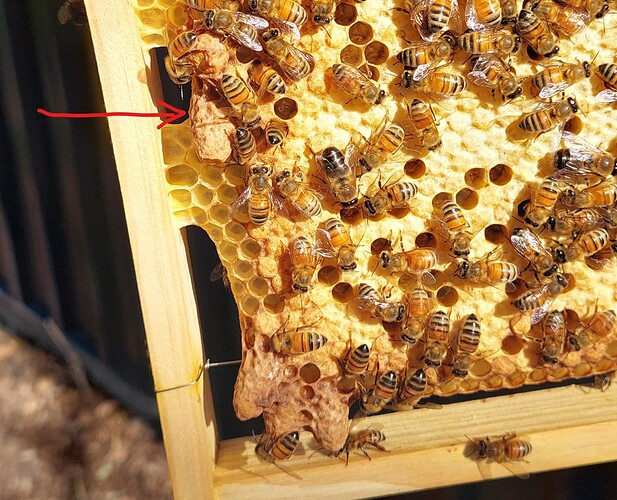 Hi Matt, that’s certainly something you can do. I only did it once which turned out to be successful. The downside is that the one queen cell could contain a runt. You miss out on the process of natural selection when there is only one queen cell. On the other side of the coin, the strongest queen could be that single queen which robs the first colony of the strongest queen. Sorry to sound negative, however I like to leave all the queen cells on a frame for a nuc, with the view of natural selection.

I’m happy to wait another week or 10 days for a new split to make their own queen. Then they will have the advantage of natural selection as well.

If I have a split with multiple brood frames containing queen cells, I’ll split that split after the queen cells have developed, while placing a frame with queen cells in each split. That doubles the chances of getting a successfully mated queen. Plus it reduces the risk of a stronger nuc swarming with the first queen to emerge. I discussed this strategy with @akthommo today on the phone.

Thanks Jeff. I always learn a few more things, not only about bees, but growing fruit and veg, finances, politicians (ha!), whenever I talk to you. A great life long learned resource about lots of stuff.

Another thing to consider is looking at the QC at four days. Those that are capped will have been made from older larvae than the uncapped ones and therefore feed less royal jelly. These older larvae produce inferior queens and the capped cells at day 4 should be culled if there are some uncapped QC, like in your picture.

some good feedback and food for thought, thank you

Hi @JeffH. I’m still having some trouble with this particular split and thought you might have some ideas. All of the queen cells (in the photo above) had all hatched out but no sign of a queen. I’ve had to add another frame of bias and some more brood for what I think is attempt #4.

Is the positioning of this 5 frame nuc ok? It’s very close to other hives and I wonder if the new queen may have ended up in the wrong hive? What do you think?

Hi Matt, I see that was 17 days ago. No doubt all the queens would have emerged or got killed by now. I never look for the queen, only evidence of a mated queen, no sooner than 28 days from when I added the frame of bias. I have found that young queens are vulnerable to getting balled & killed, so therefore I take a quick look for sealed brood. Once I confirm it, I quickly close the hive up again.

My message is: Don’t look in until 28 days has passed. If no brood, add another frame of bias. Keep doing this until you see evidence of a mated queen. That’s exactly what I do. The only thing I have to remember to do is write down the date of the frame of brood I added.

I don’t think that the adjacent hives are too close to the nuc box. I don’t like those coreflute boxes. They don’t offer much bee space around the frames. I put splits into 8-10 frame brood boxes.

PS. After adding brood, it’s ok to check in to look for queen cells up until about 10 days. So therefore you could add new brood after only 10 days, instead of 28 days.

Sometimes I’ll add new brood after not finding evidence of a queen, only to find very advanced brood in 28 days time. That means the queen was there the first time, only a bit slow to get started.

Ok great thank you again. I will cofirm the presence of queen cells up to 10 days, add bias if needed.
If queen cells exist I will not disturb them for 28 days.

I agree re the coreflute boxes. I will start using a proper brood box in future.

I recall you saying that you write the date of the split on a card under the top cover so I have been writing on white tape and sticking this to the back of the brood box. I have also started writing other detail as well - like the date of inspection, and the status of brood / honey super. For example: BB 3/10 means brood box only has 3 frames of bees and so is weak. Is there some kind of “universal language” that is typically used in beekeeping for this kind of thing or is it just a case of make it up yourself?

Hi Matt, just make it up yourself. Main thing is you can understand it.

About the 28 days: it’s 28 days from when we do the split. If we confirm queen cells on day 10, we don’t look in again for another 18 days. So basically we leave them be from about day 10 until day 28, which is the time that I found young queens to be vulnerable to balling, which is only my guess as to what happens to them. This is based on a better success rate when I don’t touch them during that period.

I checked on a hive this afternoon. I split it on the 25th of last month. Today being the 22nd, I found good brood, however uncapped. I figured that if I had waited 3 more days (31 days), I would have found sealed brood. I was tempted to check 3 other colonies that I split on the 27th & 28th. I decided against it. They’ll keep.

Ah! Thanks for the clarification and sharing your experiences with your current splits. This is really helpful.

You’re most welcome Matt.
I used to look for sealed brood before confirming queen-riteness, however you can tell if brood is worker before it gets capped, as in yesterday, on account that drone brood in worker comb gets raised a fair bit to accommodate the extra size.

I had to go to my main site to sell a colony to a bloke yesterday. I thought to make the trip more worthwhile, I’d split my 4 resource hives that were getting strong. I filled a brood box with 2 frames of brood, bees, minus the queen out of each hive, while evenly staggering them. I put a tick on the top of the two frames that I favor for queens to come from. With the other 6 frames, I’ll bolster my queen-rite nucs at home here, with one in each hive. Then after the queen cells have developed on those 2 frames, I’ll split it into 2 nucs, before taking one back to my main site.

Hi JeffH. It sounds like you have a few different sites which is great. This will also be my scenario as I build out my colonies.

I have 5 hives next to my shed which is now all that area can accommodate so I’ve started a new area about 100 meters away. I’ve built a stand for these 3 new hives to sit on.

2 of the hives were started today with purchased queens and a few frames from stong hives from the shed location. The 3rd hive is the split (discussed in this thread) that i have just moved from the shed area to this new location.

I have taped up all the entrances to keep the bees in for 24 hours. I was then planning on putting branches in front of the hives and opening the entrances to hopefully activate a re-orientation.

Is this the right approach here or should I be doing something else?

Hi Matt, I think that’s the best you can do, without having somewhere else to take them. I would check on the populations, over the first few days, just to make sure that not too many bees return to the parent hives, which can leave the brood vulnerable to hive beetle activity.

Also remember to put @ before someones username, so that the message shows up in their inbox. Otherwise the message could go unread by the person you are addressing.

All done! Bees exited and were doing what I think were reorientation flights. I’ll keep an eye on the numbers over the coming days.

Fantastic to read this discussion about Queen Cells and splitting!

I have also started writing other detail as well - like the date of inspection, and the status of brood / honey super. For example: BB 3/10 means brood box only has 3 frames of bees and so is weak.

This is a great thing to do especially with your growing number of hives. Keeping a note pad and cross referencing will also also be helpful to track these details if ever you need to look back on the history of the hives.

Great work on building this stand, Are you thinking of doing the same with your other 5 hives?