Hi all, I had returned from a few days away visiting the most gorgous grandchild ever and had a swarm in a tree near between the house and the bees. I collected them and placed them in a 5 frame nuc box with foundation frames that evening (sunday) all seemed to be going well, placed it near the other hives thinking that maybe some would get confused and return back to their old hive as it seemed quite empty. Wednesday evening when returning from work I noticed that it appeared there were no bees in the nuc, this was confirmed with a quick look see. There were 5 straglers. the cells had started to be drawn and all seemed going okay.
Any suggestions why this may have happened? 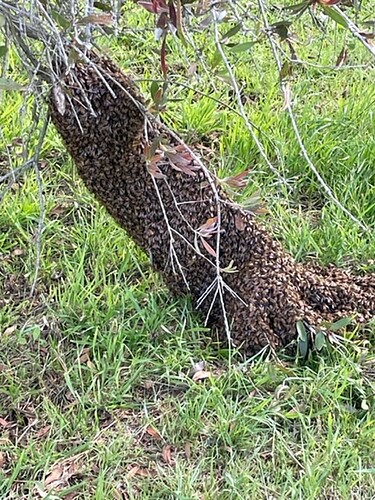 Maybe you didn’t have the queen.

Hi Ian, that’s a huge swarm to be putting into a 5 frame nuc box. Apart from that, I always use a frame with a lot of open brood in the capture box, as a means of holding the swarm. That works most times. With the odd time it didn’t work, maybe 2 or 3 open brood frames would have held them.

You have to remember that while that swarm was on that branch, scouts were away looking for a suitable hollow. Sometimes they find hollows that are something to get excited about, so therefore they will entice the colony away from the hive we provide, in favor of the hollow they are excited about.

A foolproof way to stop this from happening is to take the capture box, with swarm well away from the area as soon as possible. That should stop the scouts from looking any further. once in the new location. That always works for me.

Thanks, yes I did know they were very crowded, I was hoping to stop the swarming altogether, however time and resent rain didn’t allow me to remove the queen cells or do a split. I am restricted from moving it as Im in a purple zone in NSW.
Now to focus on the remaining hive occupants, theyll be a bit vulnerable to SHB with less numbers.

Hi Ian, you made a good point about hive beetles. The main thing to do is to remove any frames containing brood or pollen that the remaining bees don’t fully cover.

Hi Ian,
I caught my own swarm too. It was big, but not as big as yours (looking at your pic). I put them straight in one of my swarm traps with 6 frames and lots of space below (as shown). Two days later, I took one look at them and upped it to an eight-frame langstroth. 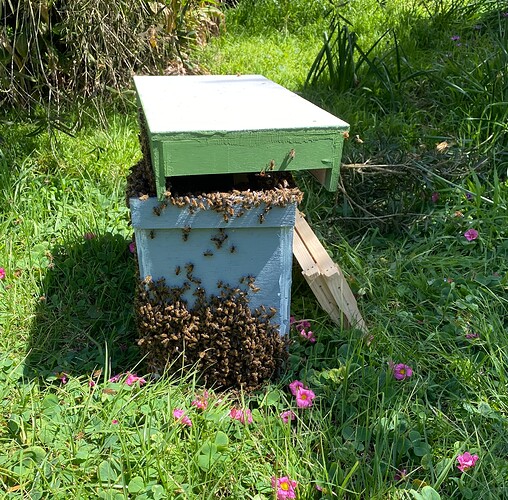 Hello, well there was action again today in the back yard with another swarm, this one not so large and again put in the nuc box, I dont have any other boxes. Hopefully theyll stick around although I must say I dont nessessarily need another one. As Im in a purple zone I dont want them to fly east and get caught with the baiting.
Ill see how they go.

when it happens 3 times in 3 weeks, am I missing something? the swarms are getting smaller and smaller. 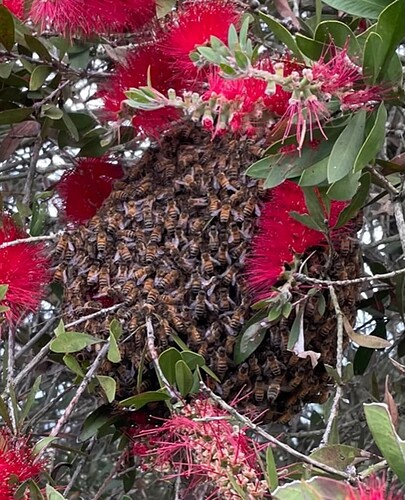 Beautiful pic! But unfortunately what’s happening is your colony has many queen cells and will keep swarming until ?? Each one will be successively smaller because half the population leaves with each newly-emerged queen. These are called cast or after-swarms, and the queens after the first or prime swarm are unmated. Look up Wally Shaw in the search for guidance on how to address things at this point to prevent further swarming. You can combine them back together again once you settle it all down.