Feral honeybees do the majority of agricultural pollination in Australia as I understand it. So if they were wiped out it would have a significant negative affect on agriculture. As you say: it may be of benefit to native fauna.

I’ve heard the same but with AFB. I don’t suggest that I deal with AFB well (who actually does) but I found some comfort in their expression of preference for VD over AFB

but both are horrendous.

I had the thought of what if the government/DPI put out a monetary incentive for people to locate feral colonies within the emergency zones. People could find them by Beelining!

well- with AFB the only solution is to kill all the bees- so yes it is worse for the infected hive. But AFB typically only infects about 1 in 100 hives per year on average (meaning an amateur with one hive could be lucky enough never to experience AFB in their lifetime)- whereas if varroa becomes endemic it will likely be an ongoing issue for all beehives and all beekeepers- a whole new level of extra work, expenses and lost productivity. So it is by far the very worst pest for honey bees in the world as far as I understand it. From what I am reading there is little chance of it spreading to native bees so that’s good news.

and yes: DPI in NSW will be conducting bee sugar lines within the affected zones to locate feral colonies. Hopefully that is already happening as of today.

Worryingly on some facebook forums there are already people claiming this entire thing is a hoax- perpetrated by the Globalist Deep state/ChiCom World government etc, to force people to accept more chemicals, reduce peoples food security- and God only knows what else those cookers can imagine or read about on some dodgy forum. We need to fight that misinformation as it could lead people to not inspect/treat/notify varroa and even to move their bees around illegally.

and yes: DPI in NSW will be conducting bee sugar lines within the affected zones to locate feral colonies. Hopefully that is already happening as of today.

Worryingly on some facebook forums there are already people claiming this entire thing is a hoax- perpetrated by the Globalist Deep state/ChiCom World government etc, to force people to accept more chemicals, reduce peoples food security- and God only knows what else those cookers can imagine or read about on some dodgy forum. We need to fight that misinformation as it could lead people to not inspect/treat/notify varroa and even to move their bees around illegally.

Yes, I had my first experience with this perspective this morning on Flow’s Facebook Live. I was absolutely was shocked.

From what I am reading there is little chance of it spreading to native bees so that’s good news.

I actually got to speak to Tim Heard yesterday on the phone briefly and he explained what he did in this article but also added that we simply don’t know a whole lot either.

From what I understand DPI will be open feeding honey within the eradication zones before poisoning the honey in an attempt to kill any undetected feral hives or non reported hives.
By my calculations the eradication zone is now around 100,000ha, at one feral hive per 10ha that is a massive number of hives.

I wonder what insecticide may work this way to kill whole colony and all colonies reliably?
On other hand, as a super-spreader event it may do wonders…

I’ve also heard today that there is no compensation being offered for ‘hobbyists’. And from what I understand that’s folks with less that 100 hives. This is a total mistake! It discourages people from coming forward and being honest- and 80 hives is a massive expense/loss.

I’m also hearing that there is big pressure from almond agribusiness for pollination services to go ahead in a few weeks- which means hives from nsw going to Victoria. Again: to me this seems a massive mistake and should NOT be allowed to happen.

Too many people in government are beholden to the financial interests of big agribusiness. Such folks cannot be trusted to make the best decisions re the welfare of bees, honeybees and native bees- or the interests of beekeepers.

South Australia has put a hold on movements of hives into the state- Victoria should too.

Sadly the news I am hearing is not at all good and I don’t have confidence this is being dealt with well by the relevant agencies. What I am seeing on the nightly news does not accord with what I am hearing from beekeepers in NSW.

As beekeepers I think it is our duty to advocate on behalf of bees: and that means doing EVERYTHING possible to stop this outbreak dead in its tracks.

I am also hearing despair from folks close to this outbreak and a belief it may already be out of control.

Questions need to be asked: such as- What is the source of this outbreak??? The more I hear the less it sounds like the sentinel hive that detected the mites was the first hive infected. Read between the lines on the news and this question is not being addressed… why???

I wonder what insecticide may work this way to kill whole colony and all colonies reliably?
On other hand, as a super-spreader event it may do wonders…

Fipronil is what I think they will use.

Semaphore I didnt expect any compensation it was the same after the fires when I enquired about assistance. Nothing for hobbyist regardless of hive numbers, was plenty of hay and the like even if if you only had 3 sheep but 50 hives nothing.
We have a 6 month biosecurity lockdown for a reason, to hell with almond pollination their losses will be far more than 1 years production should verroa become endemic. Media keeps going on about a 70million bee industry but no mention of the billion dollar plus of pollination services the agricultural and horticulture industries will lose.

If they get it under control I am happy to give what I can in splits to people that have lost theirs in the eradication zone. If it gets away I am probably less than 50/50 on if I continue to keep bees.

That’s good news about Victoria. Apparently they will allow Queensland bees to transit through nsw on their way to the almonds but that should be ok- as long as they don’t stop and let the bees fly- which I suppose they wouldn’t this time of year most likely anyhow.

I don’t know why they have to burn whole hives, especially Flow hives, while Flow frames can be frozen. The inside of hives can be scorched.

From what I hear yesterday they were destroying 100’s (possibly thousands) of hives belonging to a single beekeeper at the epicenter of the outbreak- doubt there’d be a way to freeze them all?

Not to mention the movement restrictions mean you cant transport them to a freezer.

All that needs to be done is to keep the equipment for 35 days in place not accessible to bees. Without brood and bees, all varroa will be dead by then.
I guess, the authorities simply not taking chances.

There is another problem with freezing. At negative 10-32°C varroa may survive 48-72 hours. So it is a long freeze too.

I was just talking about Flow frames, not large volumes of hives. I would still want to keep my boxes, lids & bottom boards, even with a large volume. Especially after killing the colonies with petrol fumes.

That would be hard to watch.

There’s a guy on you tube claiming some of the sentinel hives haven’t been inspected regularly. This sounds to me like the foolishness on Facebook mentioned above but you never know. I really hope the authorities take absolutely no chances.

If Australia can waste billions on Jobkeeper etc it can spend a few million on a really strong varroa response.

Maybe I’m being naive, but why the slash-and-burn approach when the rest of the world already uses a cheap and effective mite killer without harmful impact on bees or equipment? How difficult would mass OAV really be - inside shipping containers brought to the sites perhaps?

Maybe the bees in those apiaries would still have to be sacrificed, but I’m with @JeffH on avoiding more waste whenever feasible.

Well, you see, it requires planning, budgeting… pesky things like that. On other hand, there is a can of petrol and a matchbox

Actually, it is getting even better.

“Registered commercial beekeepers will be compensated for all essential equipment, hives and bees that are destroyed through this process,”

“We know that recreational beekeepers will play a big role in helping to help prevent the further spread of varroa mite,” the minister told AAP.

“They aren’t included in the current compensation agreements. We are looking at what support we can provide them if there is a need for it.”

I can imagine the level of enthusiasm among hobbyists to “play a big role” at the moment.

God knows how many unregistered guys are out there. But they were promised not to be fined if they choose to report varroa in their hives

Maybe I’m being naive, but why the slash-and-burn approach when the rest of the world already uses a cheap and effective mite killer without harmful impact on bees or equipment?

Fear of the unknown sure motivates some to take extreme measures and good luck if you expect government to control the spread of this mite. That sure wasn’t the case in Canada in the 1990’s.

Yes try to slow the advance but education on how to deal with varroa is key…and it’s so simple at least in my part of the world. Varroa destructor is hardly a conversation topic these days with established beekeepers in my area as everyone has figured out how to deal with it…otherwise they would be out of business.

Your strongest hives in the fall are the perfect candidates for varroa to manifest it’s presence…they attract field bees from mite invested hives nearby. I’ve had a nearby bee research facility check my hives in early fall and the reports come back clean. Then in the middle of summer the following year, the hive crashes. Timing of application of oxalic acid shop towels has to be done well before the late fall mite infestation…and I consider the labor and time to apply these towels insignificant (it’s done when I’m doing inspections or honey removal. It’s not a big deal).

But like AFB, try to ignore Varroa and you will pay the price.

This chart formulated by Randy Oliver helped me understand the OA application regime and the life cycle of varroa intertwined with the honeybee brood cycle. I just had to adapt this chart to brood rearing patterns in my area. 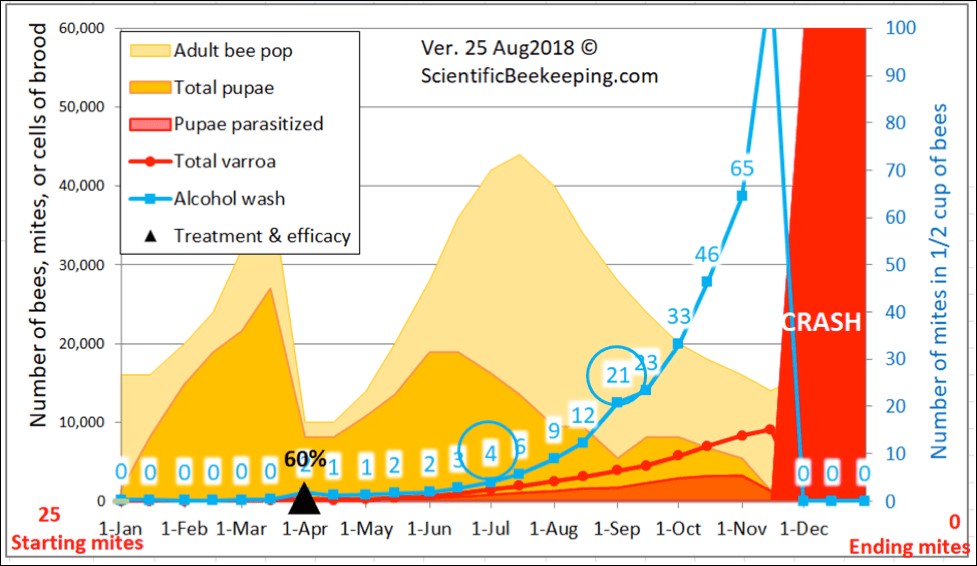 For Randy Oliver’s more recent work, here is an update: 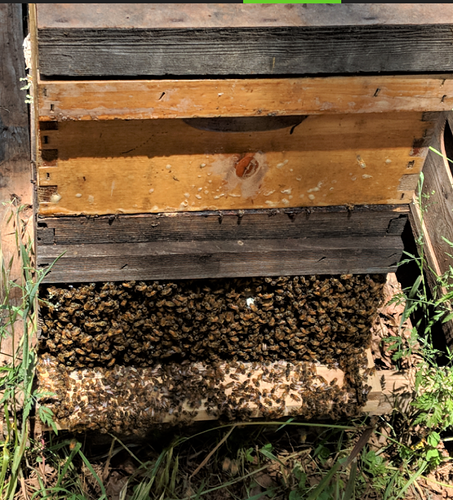 Mite Control While Honey is on the Hive: Part 4 - Scientific Beekeeping

Mite Control While Honey is on the Hive Part 4 First Published in ABJ February 2021 Randy Oliver ScientificBeekeeping.com   In the three previous articles in this series, I showed the results of my field trial of summer mite treatments. Now...