Bees and wax under bottom screen

I have bees under bottom screen, the wax prevents me from putting a tray under to catch SBH.
Should I scrape the wax off and put it in top of hive BUT I can see bee feet on top of the bottom screen, don’t want to hurt them scraping off wax. Appreciate any advice in this situation.

Hi, the bottom screen is supposed to allow debris out but keep bees in. If bees are building comb under the screen, they must be getting out which suggests that the wires forming the screen may have moved allowing a larger gap, allowing bees to get through.

You will need to check the screen and realign the wires if necessary, remove the comb.

Do you have any pictures of your hive set up…that makes it easier to give correct advice. Hope this helps.

Hi Lucienne, that sounds very tricky…pics would be good. I think you might end up having to lift the brood box off to do a good scrape off after you shake the bees off the screen. If it is wax, my only guess is that you might need to make room in the brood area and/or harvest, the bees are looking to add in anywhere that can and may not know the queen cannot pass through - or they only intend to store nectar underneath?

Another thought - is it possible you’re actually seeing propolis, not wax? If so it means they don’t like all that airflow and are trying to block it.

That is one of the problems of having an open screened base, the bees just think of it as an extension to the hive.

I would make a simple temporary base from some ply and put the hive on that and move the current base away from the hive. When there are no bees on it clean up the base and change it with the temporary one. Make sure you put the tray under it to stop the same thing happening again.

I don’t like open bases, just a big opening for SHB to get into the hive…

I’m with Rob on the merits of solid bottom boards. The easiest way to change to one if you think you’d like to is just to put a piece of core flute or very thin wood right on top of the mesh, inside the rim. If you cut the coreflute well you can get it to a tight fit without needing any fastener.

Thanks, it looks to me like the bees didn’t like the lime powder I had put on a tray under the bottom screen to trap SHB and wax moths.
When I went to replace the tray that’s when I discovered the wax blocking the tray going back under, think they were protecting the hive. Took some photos but don’t know how to add them.
I knocked off the bits of wax and put core flute with oil coating under the screen bottom.
AND I put a super on top to give them room and enable them to cool down, they were bearding and overcrowded.
They seem very happy to move up and thanks to everyone in this forum for helping.

Worked out how to put photos on - Haha I thought it was a profile icon. The blue light showed the wax up better 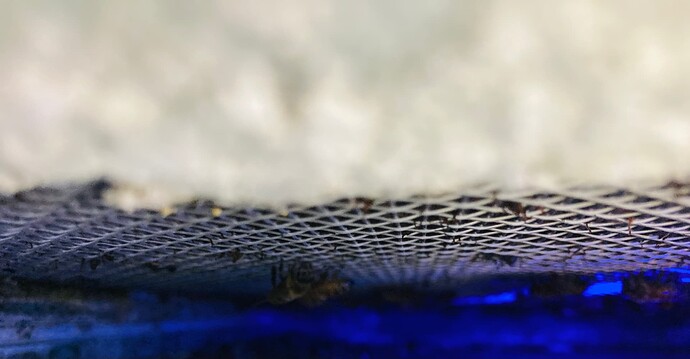 Well done Lucienne5, the photos great. I also have found bees under my Classic Flo SBB, at first I thought they must have flown under, but as I studied them I saw a bee squeeze through. Sometimes the wires move as they aren’t welded at the edges, sometimes they sag too. I’ve tried the cor flute in the top and that works with a strong hive, but a weak hive seems to struggle.
I’m now convinced @Rmcpb has a good point for swapping to a solid bottom board and made a simple plywood hive to test the theory. So far the colony has thrived, I do still see shb in there, but the bees are handling them (I am using beetle busters too).
Happy bees