Just got a used flow hive which I think is the original (classic?) version. The colony died when the original owner was away for an extended time so do not know the cause. Wax moths moved in and partially populated the flow frames. So I froze the frames for 3 days, let them thaw, painstakingly gently removed all the wax moth cocoons with thin needle nose pliers, soaked them in baby acceptable hot water, and gently cleaned with soft bristle brush.

When I split/opened the frames, to drain the water, out came this black film that I did not previously notice. I think it may have been just in the honey drainage channel at the bottom of the frame but cannot be sure. I have not seen this before using traditional hives so hoping someone here might know what it is? A fungus of some sort? 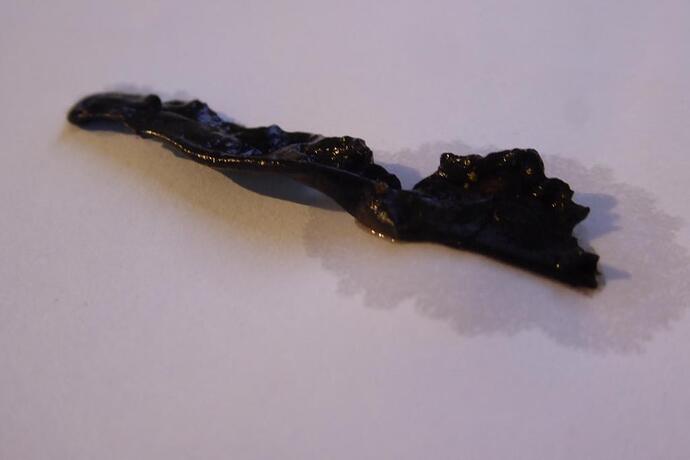 In the picture the film/slime appears thick because it has folded over. In reality it is a very thin layer. This piece measures about 1.5" long and in the worst frame had 5 similar length pieces. 3 out of 6 frames had some in varying degrees. I see some left over black film at the drain ports which I cannot reach with a pipe cleaner. As a new user I cannot post more than one pic per post so cannot attach the pictures I took. The frames were empty apart from the wax moths. Some of the cells, lets say 25 per side, are visibly black.

Should I disassemble these frames to thoroughly clean them out?
What products are safe to use? I strive to be organic unless absolutely necessary.

I will start a new colony next spring. Is there anything I should know about storing the flow frames until then?
I may not even put the flow super on, as am not concerned with honey production, so they may be stored for longer. They will be stored in climate controlled sealed garage. I have cleaned all wooden parts with a soft brush to remove wax moth remnants. I have brood box with 8 foundation backed frames, regular super with 8 bare frames, and the flow super with 6 flow frames. The non flow frames are all empty, with no wax, but I will freeze those too just to be safe.

Thanks for all input!

Hi & welcome to the forum.
It’s always a worry when one doesn’t know what caused a colony to die out, when it comes to second hand beekeeping gear.

The black film is probably nothing to worry about. Those wax moths were probably doing you a favor, because they don’t chew plastic, however they do a good job of cleaning everything else up. Once they are finished, it’s just a matter of pressure hosing all the wax moth crud out of the frames, leaving them almost like new again. That’s been my experience with one client’s Flow frames. I have a second set from a different client that the wax moths are working on, which I suspect should be finished by Christmas. That might be a good solution for you, seeing as you’re in no hurry to use the frames.

Should I disassemble these frames to thoroughly clean them out?
What products are safe to use?

You could do, if you want them to be perfect. The most likely identity of the black slime is mildew. It is very common in hives, and doesn’t really bother or hurt the bees. They usually remove it from well-populated parts of the hive. One other thing that you could try is a 5-10 minute soak in 10% household chlorine bleach. That will kill off any remaining mildew spores. Flow instructions are not to leave the frames in the bleach for more than 20 minutes. Simply rinse well with water when the time is up and allow to air dry. Bleach is harmless for bees, in fact they happily drink swimming pool water, which is pretty close to being dilute bleach.

I don’t know how substantial your pipe cleaner is, but I have found that these work pretty well for me:

Other owners have devised methods for attaching a thin dish cloth like these to the Flow key, then twisting around inside the channel to wipe debris off:

pressure hosing all the wax moth crud out of the frames

Thanks for the reassurance that the black film is nothing to worry about.

Did not know the frames are strong enough for pressure washing. Do you do it from a distance, like 2ft from nozzle to frame, or do you go closer.

Yes the wax moths did a great job of cleaning the frames. I was worried about the amount of force needed to open the frames but it eneded up being easy.

The most likely identity of the black slime is mildew

Thanks for identifying as mildew. I’ve never seen mildew cause a film like that. I ended up removing the bottom wire, on the 3 worst frames, which gave me enough access to clean out the end of the drainage channel and see that there was no more black film inside.

Don’t remember where I got my pipe cleaner style brush but its 16" long and worked wonders on the frames.

I found that a garden hose set on pressure worked well. I worked on the outside first, before hosing down the channel. It sounds like the wax moths had already finished the job for you. Anyway it sounds like you’ve had a happy ending, well done.