I might have two new queens - how to proceed? 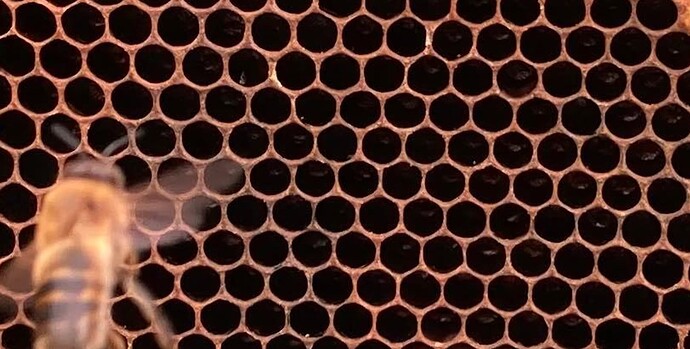 Unknown1741×881 134 KB
Hello everyone, I am a relatively new beekeeper (13 months) and would love some help with the following situation. I am in SE Qld.

When I looked through the photos of the inspection I think I found eggs in one of the frames in the hybrid above the QE. What do you think? The queen I saw in the brood box was quite large so I don’t think she would fit through the excluder. This would mean I had two new queens, one above QE already laying and another below which I saw and then flew off. (I must have missed the second one at last weeks inspection.)

So if the queen that flew off is gone everything is good. If she came back I now have two queens. What am I going to do then? I definitely need to get the queen out of the super because I don’t want her to lay in the flow frames. There is still some capped brood up there so when the bees hatch she can use that frame for laying. I assume the queen prefers laying in normal cells (as opposed to flow cells) so I should be fine for a few days. Or does she lay drone brood in the flow frames??

What do I do if I have two queens?? I really don’t want to split because I have neither the time nor the space for a second hive.

Thanks for your advice :-))

Short term I would put another QE above the Flow box and add a top entrance. Quickly you will find if you have two queens. If not then just move the queen in the top box down to the bottom box and when all the top brood has emerged remove the top box and entrance.

Problem is that if you really have a queen up top there is a fair bet she has layed in the Flow frames so keep an eye on them and clean as necessary.

Hi Esther, welcome to the forum. It’s sad to read that you are too time poor to do a split, if that was the best option. However I don’t think that is necessary at this stage.

It’s easy for people to think that a Flow hive is the best option for those that are time poor.

I wonder how the queen above the QE got mated because they don’t mate inside the hive. She must have gotten through a faulty QE.

Queens normally fight it out to the death, however I recently discovered by a chain of events that a colony had 2 queens. One must have been the old queen working alongside her supersedure daughter. Based on that observation, a hive can have 2 queens.

Hi, thanks for your answer.
I inspect weekly at the moment and spend lots of time researching and thinking about my bees. I know flow hive requires just as much time as normal hive and am definitely putting in the time. Just don’t have time to double that effort.
I wonder if the queen couldn’t get out for her mating flight due to QX (which is metal and shouldn’t be faulty), she might still be laying but only drones, right? Will know in 10 days when these eggs are capped. I also realised that I had larvae below and above QX 10 days ago - don’t know how queen got through excluder to do that. It’s all a bit strange. I will inspect on Fri or Sat to see what’s happening.

The synergy benefits of having two hives means you have a second hive to draw resources from & vise versa.

It’s good that you’re going to be checking in 10 days time. Try to avoid any brood reaching pupae stage in the Flow frames, because the cocoons that are left behind makes it hard for honey to flow.

I dealt with the first hive as a laying worker hive, by removing all the brood & replacing it with a single frame of brood from a good queen, before swapping it’s position with a similar strength queen-rite colony from quite a few meters away.

With the second hive, I found the queen before killing her & leaving her body in the hive, removed the brood, added a frame of brood from a good hive, then closed it up.

I’ll check both hives in about 28 days time.

PS. I have found faulty metal QEs, therefore having a metal QE is no guarantee that a queen wont get through.