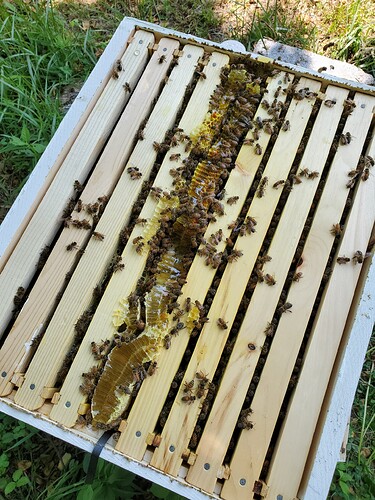 20220522_1251131920×2560 691 KB
Hello, when i loaded my new hive i tried to follow instructions by removing a frame then putting the queen inside her box for 2 days. I then took out the plug but left the queen box in. I wanted to go in in a few days to add the frame and remove the queen box. However, it was cold or raining for weeks and when i got it the open space was filled with a column where the frame would be. It looks healthy with pollen, honey and what I think are brood. It looks fine to me. Should i just leave it or try to stick it into a frame? They are not fully filling the brood box yet so didn’t want to mess with them. Any thoughts? Thanks.
chau06 May 31, 2022, 5:49pm #2

If you can get it out in a big chunk then I’d recommend rubberbanding it into an empty frame. Are they drawing good combs in the other frames?

If the bees are building the other frames nice & straight, I would be inclined to leave it there for the time being. My reason being that after a while the middle frame will finish up to be mostly brood. Plus will be easier to handle once most of the honey is gone. The comb will be stronger after a few generations of leftover cocoons to strengthen it, making it easier to rubber band into a frame.

PS, are you a bee-haver?

Thank you both for responding. At the time they have not moved out mych from the center. There is a ton of honey in the comb. I don’t want to disturb them too much being a new hive. I only have this one which i am watching for my dad who can’t have one where he lives. I just feed them a lot to help them out. I don’t know what a bee-haver means. I think i will leave it for now and adjust it later.

I think one of the many bee puns is bee have/hive yourself.

I just feed them a lot to help them out.

Hi Dan and welcome! I noticed you’re in MD so just wanted to suggest that you probably don’t need to be feeding the colony now. Here in SE PA the nectar flow is full-on, so most likely it’s the same or only a little further ahead/closer to dearth for you.

I did stop but somewhere along the line they left the hive scavenging the stores. There are still somewhere nearby since I’ve been feeding them again but don’t know why they left. Beetles and mites and maybe I expanded too soon.