Swarm in a house gutter, how to get these bees into a hive?

How to get these bees into a hive when the roof angle doesn’t allow for a hive to sit next to the bees? 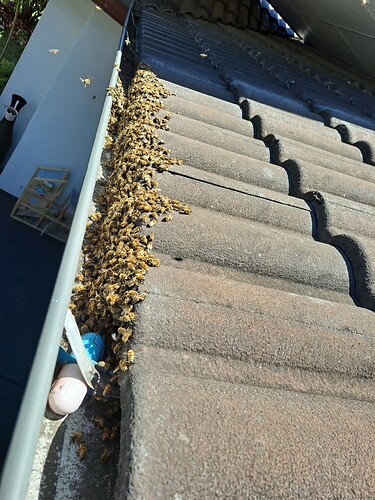 Maybe build a type of A-frame (or triangle trestle frame) to fit the roof angle with scrap wood and rest the swarm capture box on that. However, if they have built comb under the tiles, it is going to be a heck of a job to persuade them to leave!

I had one just like yours, only iron roof, I put a box on the roof just above them, entrance facing down. Some moved in, but most stayed in the gutter. I found that the queen had already moved into eaves along with some very good comb builders, so they were never going to move in the box. I had to lift a sheet of iron and use my bee vacuum to get them all out. Very tight squeeze.

I got the bees into a hive, using my preferred strategy, after viewing the above photo that was sent to Wilma’a mobile yesterday.

I must have accidentally killed the queen or something, because an inspection today revealed some emergency queens underway. 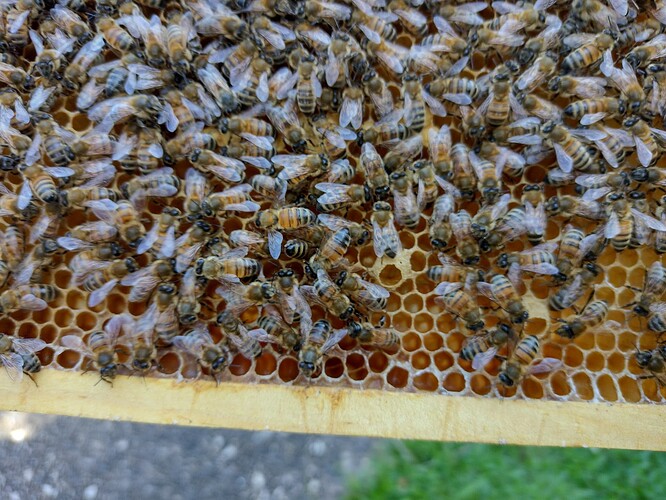 Anyway, they’re nice looking bees. There’s queen cells started on both of the brood frames I included, so after the cells are fully formed, I’ll split it in 2. 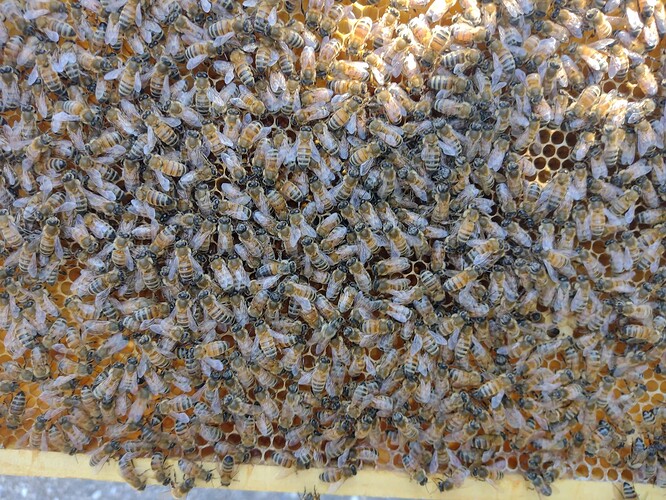 PS. One thing confused me: I had to disturb some of the queen cells to get a closer look. As it turned out, some were being built over cells with no eggs or larvae, while others were over eggs or larvae.

I guess time will tell which cells get fully developed.

I have always wondered if bees move eggs around. I can’t find a definitive answer online.

Yeah wow, I caught a tricky swarm inside a hedge that I didnt want to cut - through putting a small cardboard box on the hedge, then gently taking a few scoops of bees and putting them in the box. While they crawled down to the main swarm, I started to puff smoke under the main swarm mass and it slowly headed up and into the cardboard box, I even watched the queen heading in with some of the last few bees. I then took that box and moved it to flat ground, leaving the smoker at the original area of the swarm. Then shook the cardboard box into the brood box, All up it was a long swarm catch though. They are well establish colony now.

Hi Kieran, this one didn’t take long. My favorite strategy with a swarm such as this one is to use a brood frame with mostly open brood. In this case I used 2 on account of how wide an area the bees covered.

If you place a frame of open brood on or next to a swarm that can’t be shaken into a box, bees will migrate onto that frame. If you wait about 20 minutes, by that time the queen will be on the frame in the majority of cases. Then it’s just a matter of gently placing the frame into the capture box before putting the lid on.

Within minutes we’ll see bees at the entrance fanning their scent out, that’s provided the queen is in the box. If we don’t see that, we need to repeat the process, which I’ve only had to do once, which did the trick.

It doesn’t take long before all the bees outside the hive make their way into the hive. Then it’s just a matter of waiting until dark to pick the hive up before taking it away.

Hi Outbeck, I just sat the frames face down over the bees. The brood box was on the ground, about 5 meters away, in the garden off the footpath. The brood box doesn’t have to be overly close to where the swarm was situated, as long as we get the queen in the brood box on a frame of brood, which will hold her there. As soon as we see bees at the entrance fanning scent, with other bees marching in, it wont take long for the rest of the bees at the swarm site to get the message. That all happens like someone flicks a switch, which I didn’t see in this case. I wanted to get back home to get out of my bee suit. I went back on dark in the car, with tape to hold roof & sponge for the entrance to pick it up. I had the box full of frames to avoid frame wobble on the way home

Such an elegant and effective technique - I’ve used it several times since learning about it from you Jeff, cheers

Hi & thank you Eva, it helps to get a photo of the swarm before making our plans. In this case the photo made my mind up to take the 2 brood frames.

The only risk is that the swarm could take off before we reach the destination, which means we have to get the brood back into a hive fairly quickly. I only go to swarms that are reasonably close.

I thought this was happening as I arrived, because the bees got fairly active. As it turned out they were only moving along the gutter into the shade. The roof was hot in the sun.

Thanks Jeff - great to know!